Lives lived on the frontiers 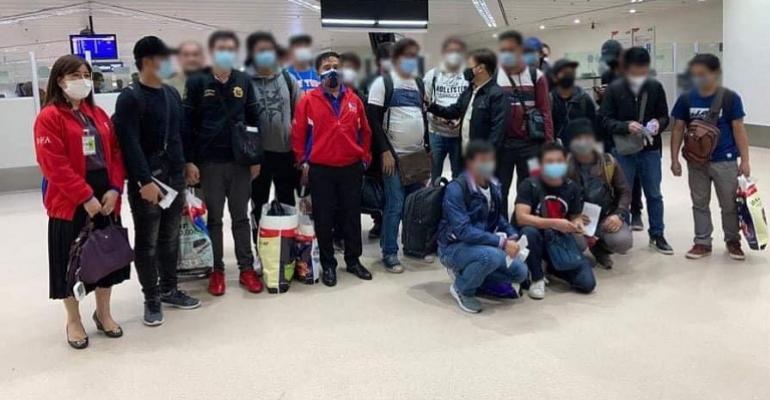 Filipino seafarers arrive home safe in Manila from Ukraine
Seafaring has sometimes been described as a “frontier activity” with all sorts of hazards that are not normally encountered in shore-side employment.

Ships trade to places where the rule of law is tenuous, while the modern practice of ship registry and brass plate ownership, despite international treaties and conventions, often make the seafarer’s place and conditions of employment somewhat uncertain. But that is what is on offer and seafarers, because they may have no other options, tend to accept their situation.

Except that our times, there is a whole range of hazards which earlier generations of seafarers have not had to confront, but which subject modern mariners to multiple miseries which nobody should have to face by just going to work.

Related: Not the smoothest of handovers

Take, for instance, the unenviable position of the 500 or so seafarers inadvertently caught up in the Russian war being waged on the Ukraine – the “skeleton crews” left aboard the 109 ships marooned in Ukrainian ports on the Black Sea and Sea of Azov. Some 1500 of their shipmates have been successfully evacuated after the Russian invasion, according to the International Chamber of Shipping, but all found themselves in a thoroughly frightening situation on the “front line”, something which for which they never had anticipated. There are, to take just a few examples, 25 ships in Mykolaiv, and 16 in Kherson, and goodness knows what will have happened to the five said to be alongside in the wreckage of Mariupol. It is said that there are seafarers from 27 nations aboard and it might be asserted that none of them will have signed on for what eventually occurred to them all.

But that’s what happens in war, when horrible things will take place, and to people who didn’t volunteer to put themselves into harm’s way. There is no war in South and Central America, except in so far as that declared upon society by the drug cartels, which increasingly regard merchant shipping as just one useful conduit for their international long-haul trade in misery and death. Seafarers are on the front line here too, a weak line of defence as the cartels attempt to get their products aboard, secreted in the cargo, hidden in underwater spaces, even clamped to the bilge keels. And it is the seafarers who are deemed to be liable, should the drugs be discovered, in many of these ports where law is doubtful and corruption endemic.

I asked a master of a regular trader to these ports what they can do to protect themselves against the cartels – security guards – divers? They do all of that, he points out, but the guards and divers, the harbour authorities and local security all live in these places and they have families and all are at risk from violent and utterly unscrupulous gangs, who live there too. And even in places where the rule of law prevails, the writ of the cartels seems to extend. The master told me of a ship in major European port, just arrived from South America, where, in the middle of the night, the vessel was boarded by a group of armed men, who held the watch hostage while they ransacked the vessel to retrieve their haul of drugs. And you just look at the statistics of drug seizures in ports like Rotterdam and Antwerp to get some measure of what law enforcement, and seafarers, are up against.

Then of course seafarers routinely face piracy and violent attacks in the Gulf of Guinea, even if the numbers may be moderating somewhat with rather more inter-government co-operation. And while it is a long time since the peak of Somali piracy, slow ships still carry armed guards and remain wreathed in razor wire, with a fear factor aboard that should not be part of a normal working life. It has been suggested that food shortages and knock-on effects of war and pandemic will soon find their way into the offshore frontiers, with increased lawlessness, and history tends to confirm this.

All of which, in a maritime world in which seafarers’ lives have been made miserable by the restrictions of the pandemic, for more than two years, ought to encourage rather more respect for this largely forgotten workforce, upon which we all depend, out on their frontiers.