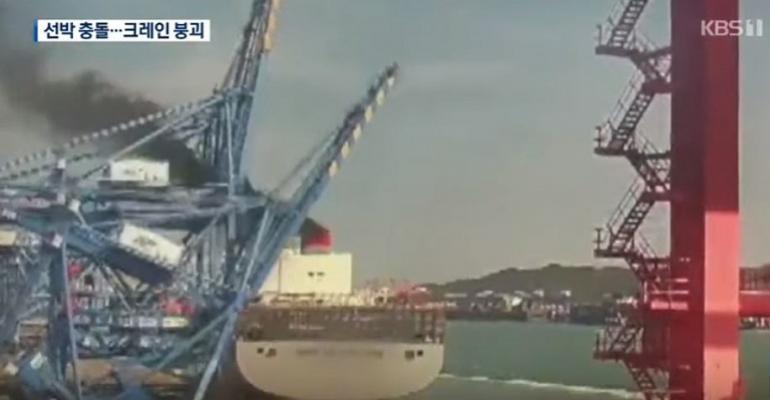 “How on earth did they manage to do that?” Such might have been an appropriate reaction upon watching that spectacular Facebook record of the container ship demolishing half the cranes in a South Korean port earlier this month.

It is a good question, but whether we will ever have it answered will depend upon the transparency with which any investigation into the incident is carried out and also the promulgation of the results.

It is a sad fact that it is still only a minority of serious marine accidents which are properly investigated in a forensic fashion and then reported on in a way that will enable others to learn from them. It is a duty of flag states which contract to the IMO Convention, but all too often this obligation is honoured in the breach – that is ignored.

There are even significant flag states which cannot be bothered to inquire into casualties involving their ships, let alone make any results public. There is a regular reminder from the IMO Secretary-General on such matters, but it doesn’t seem to make a great deal of difference.

There is important – even vital – information revealed in such reports, if they are undertaken properly. In the old shipping company I sailed with, we would get such reports mailed to our ships and we watch-keeping officers would be required to both read them and initial an accompanying sheet, to show we had taken the lessons on board. On one ship, I recall the master referring them as the “There but the grace of God go I - reports”.  And in those days, when blame was regarded as more important than causation, it was always somebody’s fault – the guilty party invariably losing his certificate.

Today, the statistics reveal that there really are fewer accidents, but there is no shortage of reading matter made available for everyone’s improvement. Just last week, locked down because of the dreaded virus, I was delighted that the postman brought two such valuable publications.

There was the latest Safety Digest from the UK Marine Accident Investigation Branch, every one of the incident reports offering some food for thought. The same post brought the Annual Report of CHIRP – the Confidential Hazardous Incident Reporting Programme, in which it is possible to detect trends and with a lot of useful information and observations drawn from these. And there are still the “good guys” – those flag states which publish regular reports into individual incidents and indeed summarise the lessons they think should be learned aboard ships flying their flags – and those who manage them. There is plenty to educate anyone with an open mind.

It is well worth reading such reports, because they very often give clues to bad operational habits that may not necessarily have led directly to the accident happening, but may have been a possible contributor. As an example I would offer the sad number of small ships that come to grief when a single watch-keeper has allowed his or her attention to wander. One case in the latest MAIB Safety Digest, tells of some chap who was watching a film on his mobile for most of his watch, with the ship grounding close to an enormous lighthouse. He was also deaf to the urgent calls on the VHF of a shore station monitoring the ship’s position, which leads one to believe that he was also asleep, comfortable in his “posture-perfect” chair, with which the owners had equipped their vessel.

In my day it was practically a death sentence if the Master had found the watch keeper sitting down on a night watch, as he knew, as did we, that the last thing one should do in the middle of the night was to sit down, even for a minute. Today they have alarms, but often seem to be switched off before the accident and the fatal chairs are everywhere.

Read these reports carefully, and you will find other things that nag at the brain. There was a recent collision between, of all things, a VLCC and a big LNG carrier, both fortunately empty, but with a lot of bent steel. The excellent report by the flag state of one of the “combatants” attributed the accident to the misuse and misunderstanding of VHF.

But the attentive reader might just have noticed that the Master of the gas carrier had been at sea for only a dozen years, two of which had been spent in command. Fast promotion through the ranks caused by shortages is known to be a growing problem, but here writ large, if not immediately obvious , is one of the consequences. It is, if you like, another reason why such reports matter.