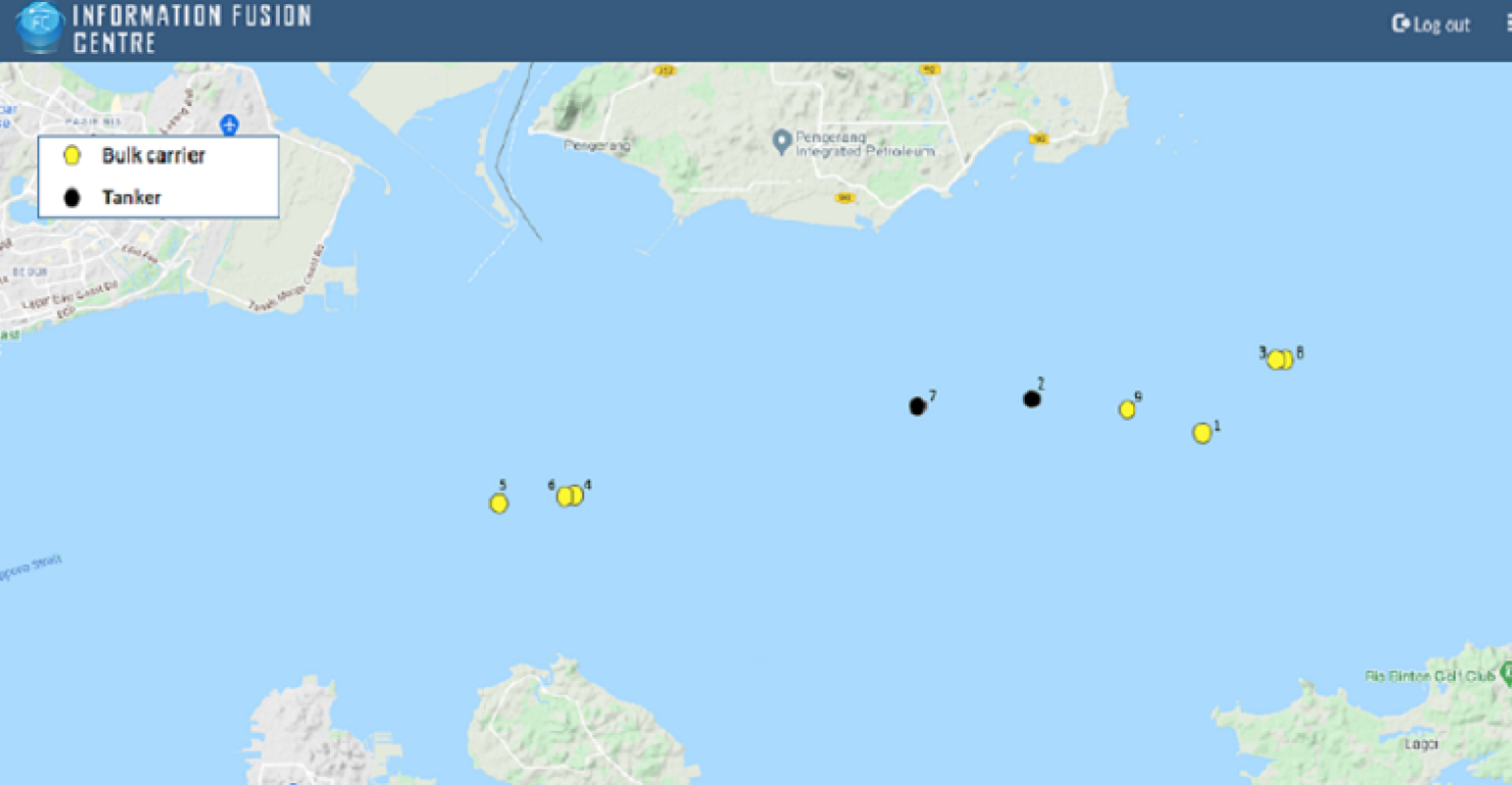 Information Fusion Centre (IFC) observed a spike of incidents (sea theft and attempted actions) along the eastbound lane of the Traffic Separation Scheme in the Singapore Strait from 01 Oct to 09 Nov 2020 with nine incidents (three sea thefts and six attempted actions).

This spot commentary aims to provide awareness of this area of concern including the analytical insights into the incidents and the observed modus operandi of the perpetrators.

2. Area of Concern. The spate of incidents occurred at the north of Batam and Bintan (See Diagram 1) in the east bound lane of the Singapore Strait. The incidents occurred during period of darkness (PoD) where there was no/minimal illumination from the moon (See Diagram 2), and mostly between 2300hrs to 0500hrs (88.9%). No attacks have been observed from the mornings – 0500hrs to early afternoons/evenings –2100hrs (See Diagram 3). The majority of incidents (77.8%) took place in the PoD from Sundays to Mondays, whereby only two incidents (22.2%) took place under the week (Tuesday to Wednesday), with a bi-weekly reoccurrence since Oct 2020. The incidents involved between one to five perpetrators, where the majority (66.7%) involved three or more perpetrators onboard the vessels (cannot discount possibility of more perpetrators not being detected or reported). Eight of the nine incidents happened in series of two to three vessels being attacked in succession, within one PoD. 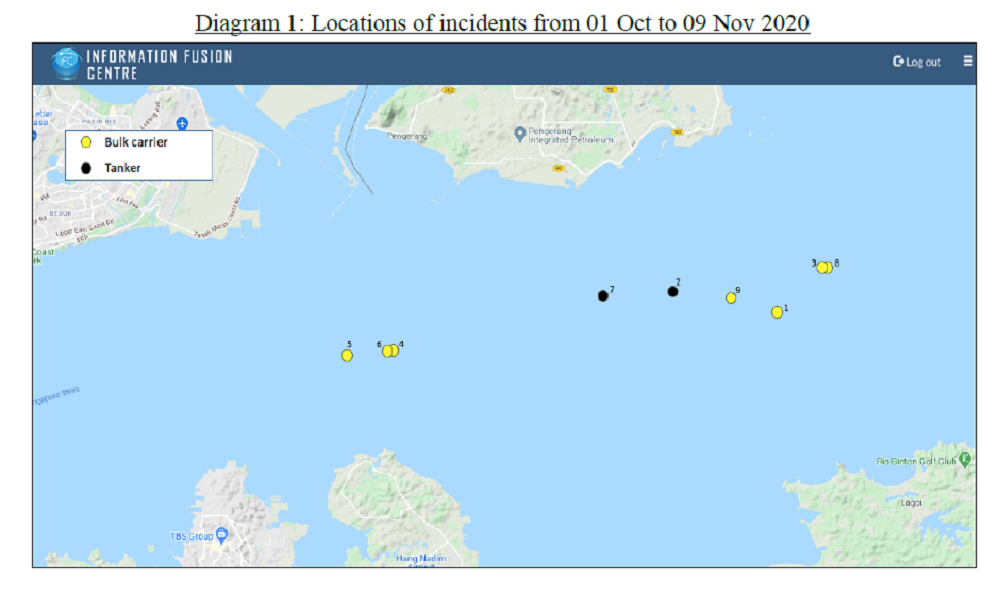 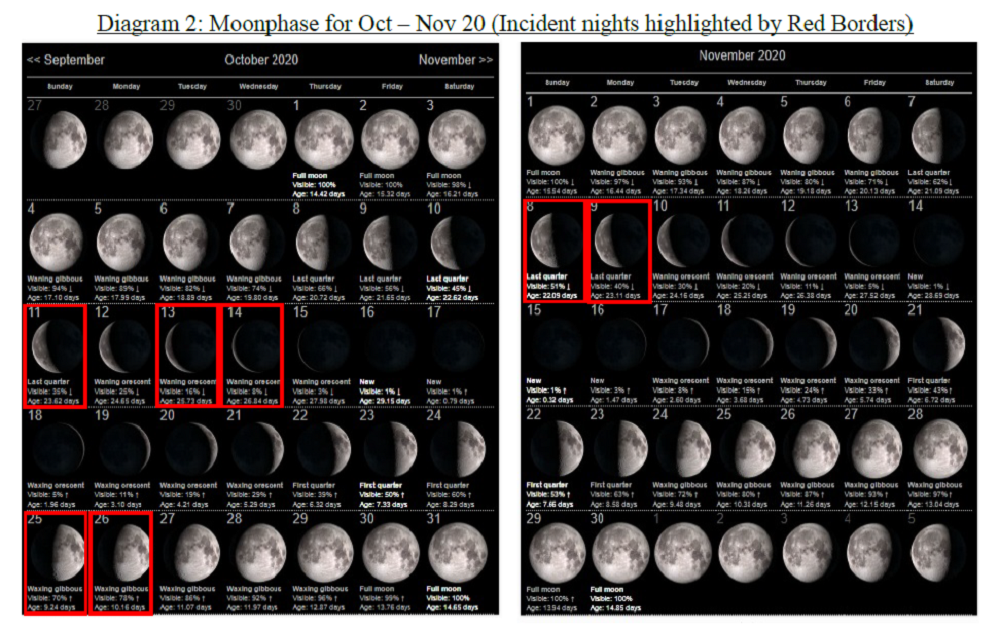 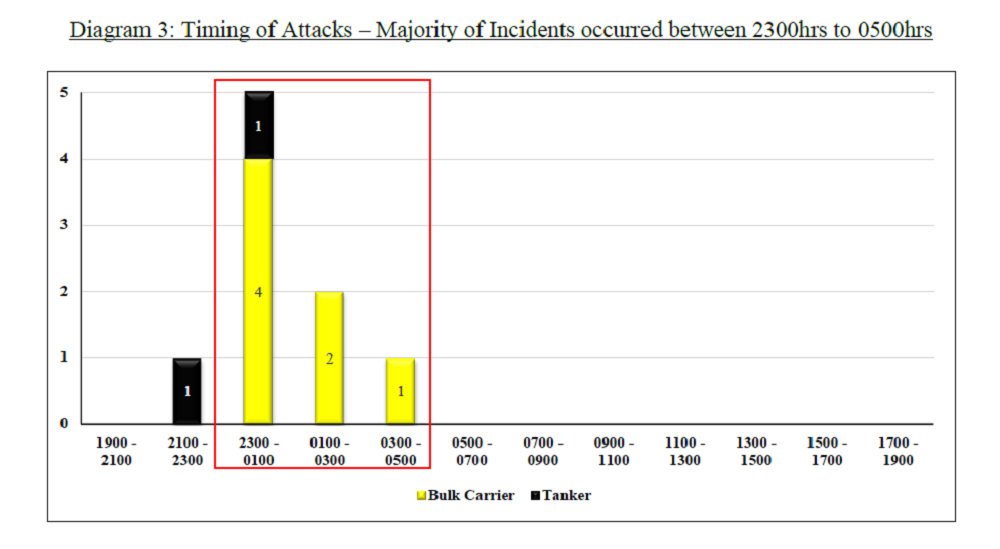 3. Observed Vessel Type and Direction. All incidents involved bulk carriers (77.8%) and tankers (22.2%) with low freeboards (between 4.5 to 6.5 meters) and slow speeds (between 7 to 12 knots). All targeted vessels were eastbound.

4. Observed Modus Operandi. Perpetrators are observed to target bulk carriers and tankers during PoD (2130hrs to 0500hrs during hours of darkness/ minimal illumination). Incidents typically involved three to five perpetrators that may be armed with long knives. In most cases, the perpetrators were sighted in the engine rooms, and have been observed to target ship stores. However, in six of the nine cases, the ships reported that nothing had been stolen. Perpetrators were observed to be non-confrontational, evading soon after detection by crew. Trending of incidents suggest the same group of perpetrators might likely target a
few vessels in the same night to maximise their gains in the future.

5. Year-on-Year Comparison Over Similar Window (Oct – Nov). The nine incidents recorded from 01 Oct to 09 Nov 2020, involving sea robbery/theft or attempted action onboard merchant vessels in the eastbound lane of the Singapore Strait, is higher than the total of seven incidents recorded in the same area over the period of Oct to Nov 2019. Of note, in 2019, the areas where the incidents occurred were primarily in the vicinity of North West Batam and Phillip Channel; in 2020, however, majority of the incidents took place near North Bintan.

6. IFC will continue to info-share the details of the incidents as soon as practicable with relevant regional OPCENS. IFC will also continue to engage the shipping community to underscore the importance of maintaining a proper and vigilant lookout, adhering to ship security standard operating procedures, and the timely reporting of incidents to local authoritie. IFC will remind ships’ masters to (a) adopt ship protection measures, (b) contact the local authorities and the IFC immediately (Table 1), when they sight suspiciousactivities (including suspicious small boats approaching), and (c) not to confront the
perpetrator(s).

7. Masters and operators are encouraged to participate in the IFC’s Voluntary Community Reporting (VCR) program as this allows vessels to receive timely information from the IFC on reports of incidents in the IFC’s Area of Interest (AOI).