The proposed Kra Canal: Maritime highway of the future 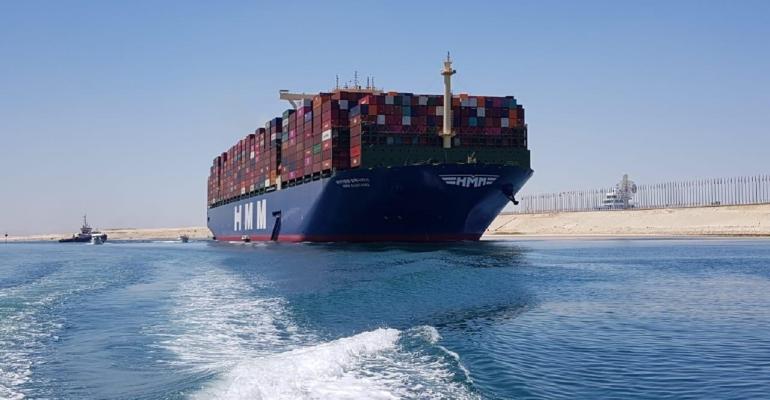 For illustration a HMM containership transiting the Suez Canal
The proposed Kra Canal has been seen as a catalyst that could transform shipping industry in the region by shortening navigational distance without having to go around the Malay Peninsula via the Straits of Malacca and Singapore.

Chinese investors have shown interest to invest in constructing this Canal in recent years. However, the project did not take off.

There have also been reports that India, the US and Australia have shown interest in building maritime canal across the Isthmus of Kra in Thailand.

At the moment, the future of the proposed construction of the Kra Canal, also known as the Thai Canal, is still uncertain. Nevertheless, assuming the project is to take off, it is crucial to analyse its features and how it would change shipping scenario in Southeast Asia.

The canal, measuring approximately 50 km long waterway across the Kra Isthmus was estimated to cost around $20bn. The proposed canal would be about 25 m deep and 400 m in width.

The proposed canal is wide enough to accommodate two ships and requires a construction period of around 5 to 10 years. It would allow ships to move between Europe, the Middle East, India and China without passing through the already busy and constricted Straits of Malacca and Singapore. The project is anticipated to employ a work force of 30, 000 people if it goes ahead.

Once it is ready, the canal would be able to shorten navigational distance throughout Southeast Asia by 1,200 nm, reducing maritime voyage by two to five days. This would stimulate economic growth and bring prosperity across the region.

In addition, the proposed canal may alleviate the massive traffic going through the chokepoints of the Straits of Malacca and Singapore. In addition, remote and less developed areas of northern Sumatra, northern states of Peninsular Malaysia and southern provinces of Thailand which are located not far from the Canal could be developed as shipping ports and hubs of the region. Lesser number of ships could also result in a reduction of the risks of piracy and other maritime crimes in the Straits of Malacca and Singapore.

Therefore, vessels sailing from Europe to the East Asia would have to pay double transit dues if they chose not to transit the Straits of Malacca and Singapore. Without doubt, navigation via both the Suez and Thai Canals would attract transit fees.

As guaranteed access provided by the transit passage regime does not apply to shipping traffic using the Thai Canal, transit of ships via the canal could be suspended, subjected to the Laws of Thailand.

Putting all the shortcomings aside, once open for navigation, there are arguments stating that the proposed Thai Canal would transform the shipping industry, as its other counterparts, the Suez and Panama Canals did when they were constructed.

The Suez and Panama Canals were magnificent projects - engineering marvels that have revolutionised world’s shipping industry. The Suez Canal shortened the navigational distance between Europe and Asia by linking the Red and Mediterranean Seas. As a result, ships could avoid sailing around the Cape of Good Hope at the bottom of the African continent.

Similarly, the Panama Canal would shave weeks of maritime voyage without having to go around Tierra Del Fuego at the southernmost tip of the South American Continent.

Nevertheless, there are also arguments stating that unlike the Suez and Panama Canals that shaved weeks of maritime voyage, the amount of money spent on the Thai Canal project would not bring considerable returns as the proposed canal shorten maritime voyage by only two to five days.

Would it end up like the Palk Strait Canal Project in South Asia?

India and Sri Lanka are separated by the Palk Strait which is narrow, shallow and dotted with many islets and sandy shoals that make it navigationally difficult. Although the strait may be navigated by fishing boats and small crafts, large vessels bound for east or west Indian ports would not be able to traverse through Palk Strait and had to traverse around the island of Sri Lanka.

During British colonial rule in 1860, a proposal was mooted to construct a shipping canal through the strait. It was only in 2001 that the Indian government approved the construction of the canal to deepen the Palk Strait.

Once completed, the 167km long and 300m wide Palk Strait Canal will shorten maritime journey of vessels from the Arabian Sea to the Bay of Bengal by slightly more than a day.

Nevertheless, a half-baked environmental impact assessment conducted by a research institution under the Indian government has proven to be disastrous to this ambitious project. The institution issued a report in 2004, basically claiming the project was good to go with no adverse ecological and environmental implications.

Twenty-one years have passed since the project was initially approved by the Indian government in 2001. With multiple escalation of project costs and depletion of funds, the future of this project remains bleak.

Obviously, if the Thai Canal is to be built, thorough studies and assessment must be considered so that it would not suffer the same fate as the Palk Strait Canal Project to be built across Palk Strait.

Be that as it may, the proposed Thai Canal project may either significantly transform global shipping industry or end up becoming the biggest white elephant in maritime history.

Assoc. Prof. Dr. Mohd Hazmi Mohd Rusli is a lecturer at the Faculty of Syariah and Law, Universiti Sains Islam Malaysia (USIM). He obtained his PhD from the Australian National Centre for Ocean Resources and Security, University of Wollongong, Australia. He was also a research fellow at the College of Asia and the Pacific, Australian National University, Canberra. He has contributed a number of commentaries to renowned international media such as the South China Morning Post, Singapore Straits Times, the Jakarta Post, RSIS Commentaries and Forbes. His commentaries could be accessed via his website https://hazmirusli.com His area of interest are Law of the Sea, Maritime Policy and Public International Law.