Tankers and floating storage – more than meets the eye 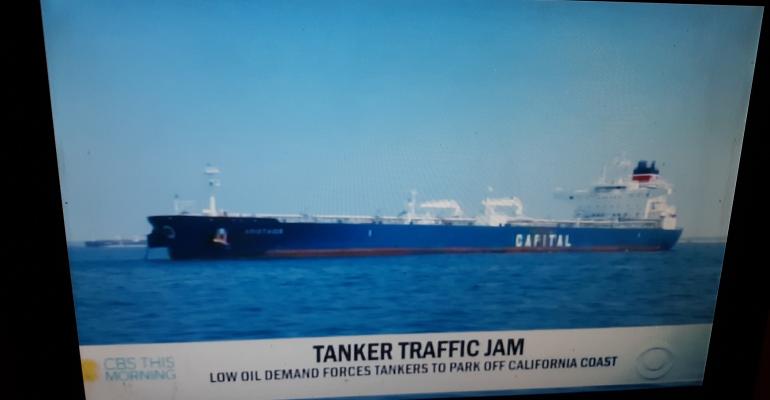 It's not often you see tankers on the morning news
As crude oil prices regained their footing in late April in the week prior to a Poten & Partners webinar tanker hires plunged.

The call, where analyst Erik Broekhuizen in New York, and on the market spot  broker Patrick Brennan, in Houston, took questions from listeners, came at a time that headline hires for large crude oil tankers have plummeted from their multiple  April peaks where VLCC’s and suezmaxes had reached $250,000 per day and $100,000 per day, respectively, down to around $60,000 per day and $40,000 per day

Not surprisingly, many of the questions fielded by Broekhuizen and Brennan concerned floating storage of crude oil, which, according to many tanker watchers had fueled April’s upward explosion in hires.

Related: ‘Unprecedented levels’ of floating storage, but where next for the tanker market?

In response to a later question, Broekhuizen added that some of the vessels crowding these ports might not have been fixed for storage, rather they were fixed for spot charters and end up doing floating storage (“de facto storage” in the words of his colleague), which was not the intention when the spot voyage was fixed- as “refineries don’t have the capacity to take the cargoes.”

Conversely, according to Brennan, some of the vessels fixed on time charters were not taken explicitly for contango plays, rather “many of them were just a hedge against a volatile spot market…trying to reduce the exposure against that spot market…in other cases, it offers trading flexibility.” He also mentioned opportunistic oil trading entities, saying, “in some cases, they may want to compete in the freight markets.”

Though the future is uncertain, both presenters noted in their remarks that floating storage is likely to increase- with Broekhuizen pointing out that many of the vessels fixed for storage during the previous months’ fixing flurry had not yet loaded up, or were still enroute to destinations.

Brennan said, continuing his response to the earlier question: “Any big impact from those longer-term storage plays is yet to be seen.”   Broekhuizen pointed to uncertainty as to when vessels on storage, some with charters for six to 12 months, would be released back into the market- which he tied to future increases in oil demand (above reduced production). He commented that “ships are probably one of the most expensive ways to store crude oil and refined products….one would expect that floating storage would be impacted fairly early on [as inventory drawdowns begin].”

Another interesting question concerned the narrowing of the oil price “contango”- as nearby oil prices have risen in very late April / early May [with Brent having reached above $30 per barrel]. Broekhuizen explained that economics of previously done deals, where physical oil had been bought a vessel chartered, and contracts sold in the futures market, would not implode along with a subsequent flattening of the forward spreads. “Traders typically lock in their profits when they do the deal,” he said.