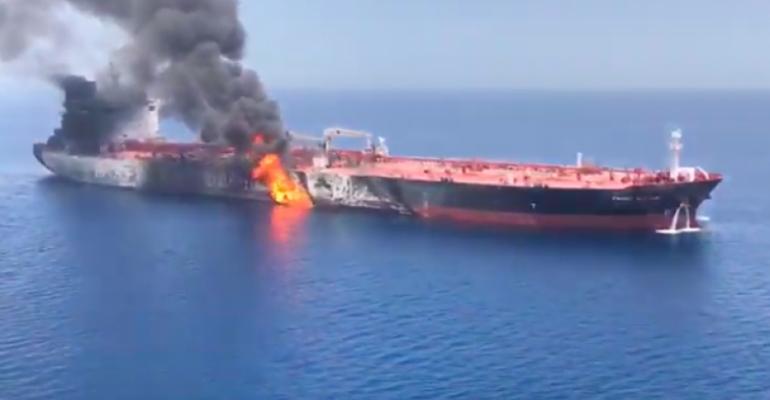 Highly effective US sanctions against Iran, that have cut its oil exports to just 350,000 barrels per day (bpd), leaving commercial shipping in the Strait of Hormuz as potential pressure point warns Mike Salthouse of North P&I.

Recent events such as the placing of mines of tankers at anchor Fujairah and in the Strait of Oman, and the seizing of the Stena Impero by Iranian forces have attracted global media attention. However, beyond specific issues such as concerns about trading in the region with UK-flag Salthouse does not believe there has been a major impact on shipping operations so far.

“It's something attracting a lot of visibility but in terms of normal ship operations its not causing any real level of disruption at the moment,” Salthouse, deputy global director (claims) for North P&I, tells Seatrade Maritime News in an interview.

What attacks such as those using mines on tankers, although denied by Iran, show though is how commercial shipping could become one of a number of targets as the country looks to hit back against a highly effective round of sanctions by the US.

Figures from the US Congressional Research Service published in July show that US sanctions have reduced Iran's oil exports to just 350,000 bpd at the end of June, this compares to 2.5m bpd prior to sanctions being imposed, and 1.1m bpd in 2014 in the previous round of sanctions under President Obama's administration when exports to India, China and Japan were still allowed. The economic impact of the huge reduction in oil exports on Iran is estimated at $50bn compared to 2017.

Salthouse notes that the previous sanctions that reduced oil exports to 1.1m bpd were enough to cripple the country. “So oil exports are massively less than they were last time round. If you look at the impact on the Iranian economy it really is a question of pushing the rat into the corner, and its got nowhere to so it bites.”

How Iran fights back covers a diverse range of possibilities. “They can create difficulties in the region at a number of different points of which shipping is likely to be one,” he explains.