Is vessel size a factor in collapsed container stacks? 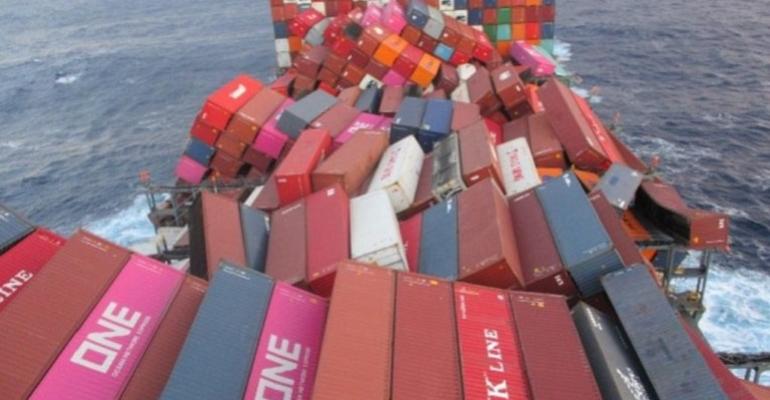 Photo of containers collapsed on deck of the ONE Apus
Last week saw one of the largest loss of containers from a vessel in recent years with the ONE Apus suffering loss or damage to an estimated 1,816 boxes in severe weather while crossing the Pacific on 30 November.

But it is not the only example of collapsed container stacks and boxes lost overboard this year including sister vessel ONE Aquila a month earlier, also on the transpacific trade, and the APL England off Australia in May. These and other incidents beg the question of whether incidents are becoming more frequent and if the size of vessels, which has increased dramatically in recent years, is a factor.

Seatrade Maritime News asked Capt Yves Vandenborn, director of loss prevention for The Standard Club, if there was a trend of increasing incidents. “There has been a recent spike of incidents with containers lost overboard. There is also an enhanced focus from various maritime states who have increased the fines on shipping companies, plus the increased cost of cleaning up the containers. That said, we would need to look at statistics in more depth to see if there is a continued increasing trend over the years,” he explained.

The question of the size and scale of the vessel sees a number of different factors come into play, although the basic equipment, technology and application in terms of securing the containers remains the same regardless of the vessel’s size.

Related: ONE Aquila diverted after container collapse in bad weather

When it comes to large vessels Capt Vandenborn of the Standard Club noted the quick turnaround required for such ships with three, four or five gantry cranes working simultaneously.

“The fitting of the twistlocks on the containers is done by the stevedores ashore, and the crane operator places the container on the deck stack. The success of a safe stack on deck largely depends on the twistlocks & other lashing equipment operating correctly once they are placed within the stack,” he said.

“In addition we have seen that not all ports adhere to the VGM regulations, resulting in heavy containers ending up high in the stack. This may not always be noticed by the crew or chief officer.”

The Standard Club also considered whether the sheer size of very and ultra large containerships contributes to the motion and rolling of the vessel in severe weather, creating greater risk of container stacks collapsing.

“On very/ultra large container Post-Panamax vessels, the large beams result in an unavoidable, relatively large GM. This in turn leads to the vessel being very stable and therefore stiff which could lead to violent rolling motions and accelerations when the weather deteriorates,” Capt Vandenborn said.

Tight operating schedules on the container liner trades and powerful engines that enable speed to be maintained even during bad weather can also play a factor. “The consequence is that, at times, container ships can be driven hard. When ships are driven hard in bad weather, the loads on the lashing gear can be severe,” he said.

“Moreover as a consequence of ship motions - a complex interplay of accelerations and forces will affect the ship and cargo. The stacks of individual containers experience lateral and vertical forces. In addition, in the event of large motions, these stacks can clash into each other.

“As a result, an entire stack of containers could fall over, which could then fall overboard or fall against another stack of containers. Stack collapses due to clashing are often progressive in that when one stack begins knocking into adjacent ones, the forces are much higher.