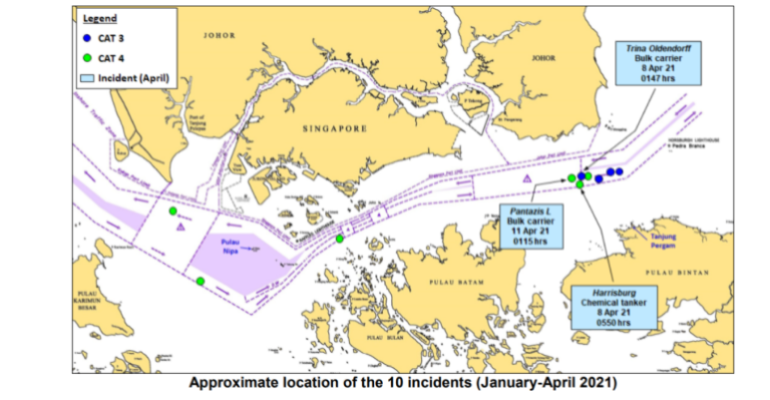 The location of robbery incidents in the Singapore Strait Jan-Apr 2021.
Three armed robbery incidents were reported against ships underway in the Singapore Strait between April 8 and April 11 2021, and the criminals are still at large, according to the Regional Cooperation Agreement on Combating Piracy and Armed Robbery against Ships in Asia (ReCAAP).

ReCAAP reported that the first incident took place on bulk carrier Trina Oldendorff in the early hours of April 8. Four robbers armed with knives were found in the engine room and struck a crewmember on the head to prevent him calling for assistance. The perpetrators fled, the alarm was raised and crew mustered, with all crew safe and accounted for and no items reported stolen.

The second incident was later in the morning of April 8 at 0550 hrs on the chemical tanker Harrisburg. Two unauthorised persons boarded the ship, but after the alarm was raised and crew mustered, a search found neither the would-be robbers nor any items missing.

The third incident aboard Pantazis L occurred around 0115 hrs on April 11 when four people were seen in the engine room. The alarm was raised a crew mustered, and a search of the ship found that some engine spares had been stolen. The crew were safe and accounted for.

The continuation of attacks after the arrest of five perpetrators in the Singapore Strait in February 2021 suggests there are other criminal groups working in the area, said ReCAAP.

“As the perpetrators of these incidents are not arrested, there is a possibility of further incidents in the Singapore Strait. All ships are advised to exercise enhanced vigilance, adopt extra precautionary measures and report all incidents immediately to the nearest coastal State,” said ReCAAP.