Biden Administration gets thumbs up from US maritime 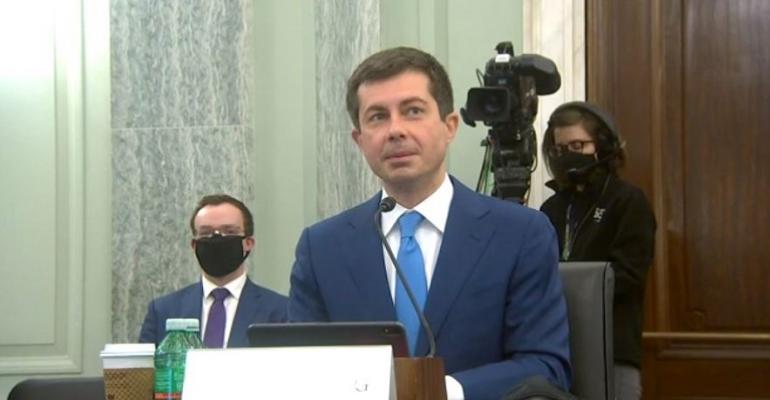 Pete Buttigieg US Transportation Secretary taken from AFLCIO feed
The first week of the newly inaugurated Biden administration seems to be getting a “thumbs up” from around the US maritime scene.

As the Biden administration settles into place, infrastructure will be high on the list of priorities. When he was Vice President, under Barack Obama, Biden had addressed the 2014 American Association of Port Authorities (AAPA) annual convention; in his keynote speech, he stressed the importance of infrastructure around the nation’s waterfronts.

Seven years later, his visions of increased funding at the Federal level for ports and waterways may now be realised. The Trump administration had grand plans for infrastructure, which did not come to fruition, though maritime funding was not negatively impacted.

Related: How will US President-elect Biden impact shipping?

The Florida Ports Council - the FPC, which represents Miami, Port Everglades, Jacksonville, Tampa and other leading gateways for diverse cargoes and for passengers - was quick to laud one of Joe Biden’s Executive Orders. President Biden was slated to issue 30 such orders, which have the same force as actual laws, within his first three days in office, on a host of subjects.

The FPC tweeted out its approval of a 21 January directive “Executive Order on Promoting COVID-19 Safety in Domestic and International Travel”. In a section of the order dealing with international travel, it states: “Sea Travel.  The Secretary of Homeland Security, through the Commandant of the Coast Guard and in consultation with the Secretary of HHS and the Director of CDC, shall, within 14 days of the date of this order, submit to the President a plan to implement appropriate public health measures at sea ports.  The plan should implement CDC (Center for Disease Control and Prevention)  guidelines, consistent with applicable law, and take into account operational considerations. “

The Florida ports group noted that its ports have been slowed down for nearly a year- and expressed the willingness of its members to work with the new Administration “on a safe path forward”.

Biden has stressed his working-class roots, and his sensitivity to matters impacting US workers.  This, in turn, has informed his picks for his Cabinet. The likely soon-to-be confirmed Secretary of Transportation, Pete Buttigieg, one of many Democratic candidates early on in the Presidential primary contests, earned kudos from an important voice in US labour- the AFLCIO, an umbrella organisation for numerous unions.

AFLCIO’s Transportation Trades Department (TTD) noted that in his confirmation hearings before the US Senate’s Commerce Committee, he affirmed his support for the Jones Act.  On their Twitter feed, the TTD pointed to the job creation aspects of the Jones Act.  A number of companies in the US deepsea fleet- with parts impacted by the Jones Act, employ union labour through the Seafarers International Union (SIU) and Masters, Mates and Pilots (MMP), and others.