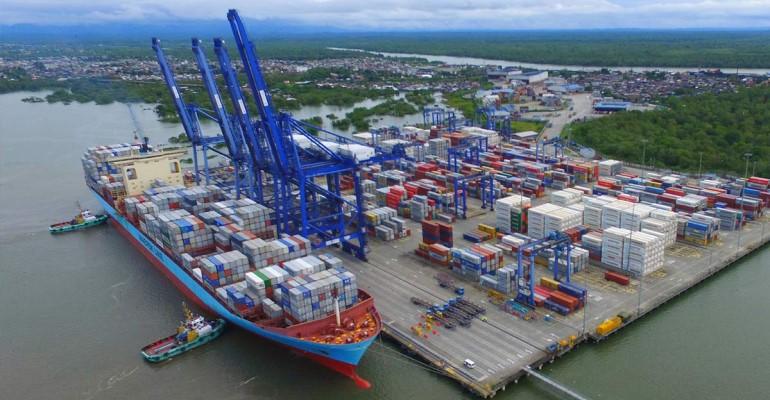 Terminal de Contenedores de Buenaventura (TCBUEN)
A group of shipping companies has suspended operations at the Port of Buenaventura as the port is full and cargoes are trapped.

The situation is the result of ongoing road blockades in Colombia, including in the maritime precinct.

The Caribbean ports of Barranquilla, Cartagena and Santa Marta were operating normally. However, the Port of Barranquilla has begun to receive cargo from Buenaventura.

According to the media, the cabotage of cargo was authorised to reach Cartagena or Barranquilla by transiting the Panama Canal.

On April 28, a national strike began in Colombia protesting against the government of President Iván Duque. Since May 19, Buenaventura has been the scene of looting and riots.

"In Buenaventura there are three ports; TCbuen (Terminal De Contenedores De Buenaventura), that has declared force majeure for more than a week now and has not received more containers; Aguadulce, almost reaching its limit, and the SPB (the main terminal, Sociedad Portuaria de Buenaventura), also very close to being full," said Javier Diaz, president of the National Association of Foreign Trade (Analdex).

On May 21, the port requested that the dialogues be accelerated and agreements be reached, given the immobilisation of approximately a total of 456,500 tonnes of cargo unable to reach its destination.

The port of Buenaventura is responsible for 35% of Colombia's non-mining-energy imports and 32% of exports, of which 41% of the total correspond to SPB.

It is also responsible for imports of bulk cargo such as corn, wheat, soybeans and fertilizers, and containers for the pharmaceutical, manufacturing, food, technology and equipment sectors. On the export side, the main products are coffee and sugar.