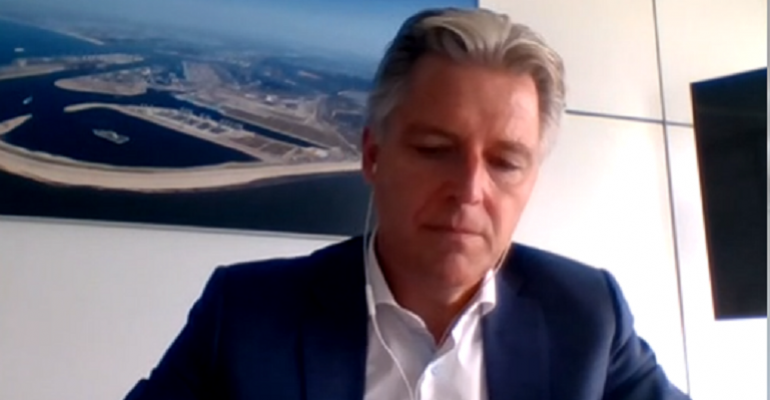 Emile Hoogsteden during online media briefing
The Port of Rotterdam is cautiously optimistic on volume growth in the second half of the year and expects security of the supply chain will be more important as a result of the Covid-19 pandemic.

Speaking to an online media briefing Hoogsteden explained: “If you had told me a year ago that by this time we’d have to announce a 9% decline in throughput I would have had a heart attack, but at this point in time, everything is relative, ‘it’s at least not as bad as we thought it would be’. The throughput volumes in the second quarter turned out to be better than we expected.”

Looking specifically at the container sector he noted that in terms of tonnes there was only a 3.3% drop in the first of 2020 compared to the same period a year earlier. This was 7% in teu terms but that was due to less empty containers returning to China.

“Towards the end of the second quarter we saw volumes stabilise and increase a bit, so that was good to see,” Hoogsteden said.

There has been an improvement in the balance of imports and exports. “Exports from the Netherlands to China have been growing at 12.5% which is remarkable. As we see from port of Rotterdam export of full containers has grown by 13.5% over the last six months,” Hoogsteden explained.

Exports from Rotterdam to China that have increased include pork, medicine, machinery, milk powder and timber.

Coming to the second half of the year he said: “If we look ahead of us and the remainder of the year we expect a cautious recovery. Of course there’s a great uncertainty surrounding that positive outlook. We feel here still and optimism, you see the procurement indexes picking up again.

“We’ve seen a huge drop in volumes April, May, beginning of June. It’s picking up from the deep end, we see volumes coming back slowly but surely.”

With the Covid-19 pandemic severely impacting the supply chain from China and in many other parts of the world in the first half the year there has been a lot of talk near-shoring of supplies and less reliance on China for manufacturing.

Asked by Seatrade Maritime News if these changes were being seen by the port yet Hoogsteden said: “We don’t really see anything changing yet. I think there will be some changes but I don’t think it will be as dramatic as some pundits will say it will be.”

He also does expect to see some nearshoring and a diversification of manufacturing from China to other Asian countries including Indonesia, Vietnam and even back to Japan.

“The flow of goods from Asia will remain to be very important, but also inter-European shipping will grow further. For us the good thing is Rotterdam is both an intercontinental port and an intra-European port,” Hoogsteden said.