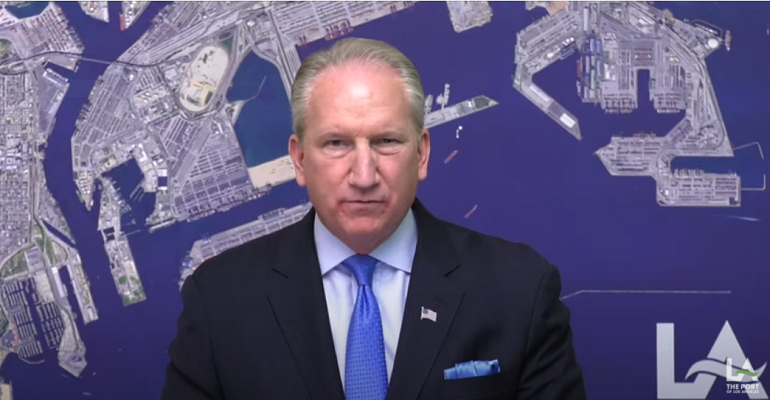 Lately, meteorological analogies have been applied to characterisations of the international container shipping arena. Hence, the title: “Weathering the Supply Chain Storm” for a late April webinar produced by Project44, a provider of shipment visibility solutions.

Against a backdrop, as noted by Project44, of “port congestion, disruption, and a resurging global economy”, the online session included a timely look at the current state of container transportation.

It was moderated by Project44’s Nick Ruggiero, with participants Gene Seroka, Executive Director at the Port of Los Angeles, who also serves as Chief Logistics Officer for the city of Los Angeles, Edward Aldridge,  who heads up Ocean Freight at mega-forwarder Agility, and Robin Jaacks, also from Project44.

Over the past six months, the queues of containerships anchored at San Pedro Bay, anchorage for both Los Angeles and neighboring Long Beach, stemming from landside back-ups with trucking and rail carriers, have featured in the trade press and, indeed, on network television news broadcasts. In recent weeks, after numerous complaints, the U.S. Federal Maritime Commission has launched an investigation into complaints by cargo interests of excessive charges levied by terminal operators.

Port of LA’s Seroka, who had noted earlier that Los Angeles is a “landlord port” said: “Detention and demurrage were never meant to be weaponized by the carriers and terminals.” Still, Los Angeles is working hard to solve shipper’s issues- using tools such as its recently enhanced PortOptimizer, a digital portal.  He expressed a willingness to deal with very specific situations, even offering a private email address that cargo interests might use to communicate with the port on their unique issue. “A broad-brush approach is not what’s called for,” he said.

The storm may be abating; Seroka provided an optimistic picture of “improvements” with reduced numbers of vessels at anchor. He said that based on recent productivity gains, “we will clear the anchorage by end May or early June”. Previously, he had been looking for a mid-summer elimination of the vessel queues.

Aldridge, from Agility, also pointed to increased air travel bringing about an increase in airfreight capacity, which could ease some of the current pressure on the ocean mode.

The past two years have seen port throughputs at Los Angeles deviating from historical pattern, starting with a rush in 2019 Q3 to bring imports in ahead of increased tariffs. Then, driven by resurgent demand beginning in Q3 of 2020 and continuing nine months later- record setting teu throughputs have been recorded at what should be a time of seasonal lull.

April 2021 throughput has been logged at 880,000 teu, with early May numbers suggesting 840,000 teu. MSeroka said that he expected a pivot, a return to the “normal” pattern starting in August, with an inventory build-up into the Q4 Holiday season -  the National Retail Federation has forecast a “strong” 2021 season.

Longer term, Agility’s Aldridge said that all concerned must address the topic of “container velocity”- a concept that gets into long-lived improvements in supply chains including the land-side truck and rail turnarounds that are the focus of Seroka’s team. Aldridge said that increased manufacturing of containers, a response to the problems undertaken by the carriers, “will only have short term impacts”.