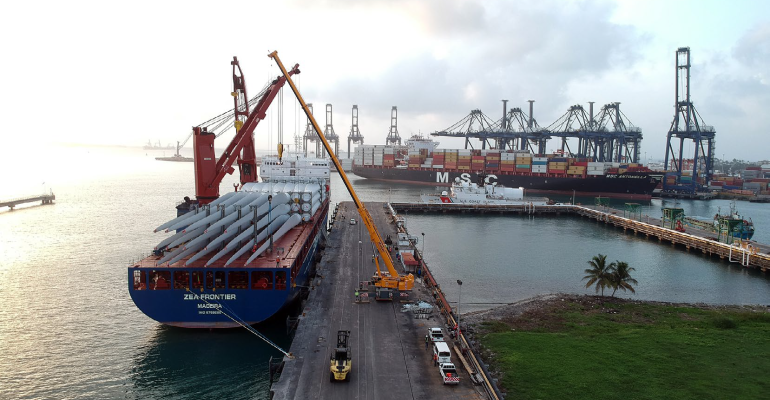 Panama operators forecast Panama’s port activity registered a milestone in 2021 with record cargo volume and growth and passing for the first time the 8m teu, with a total of 8.62m teu, up 11.5% compared to 7.73m teu tin 2020.

Various terminals showed double digit growth; the highest, 47.5%, being at Evergreen’s Colon Container Terminal (CCT) with 1.05m teu, a growth not seen since many years. Between 2002 and 2007 the terminal had experienced similar annual growth rates, CCT President Stephen Shaffer said. CCT’s higher throughput has come because of new service calls from MSC. ‘It started as an ad hoc situation earlier in the year, but a number of those calls have become regularly scheduled calls,’ added Shaffer. ‘Services have made the difference.’

‘We have worked hard to get additional business regionally in 2021 and handle significant volumes of containers and more cars, grow our general and bulk cargo business as well as better optimising our property development,’ explained at the time, Jared Zerbe, president of Panama Ports. ‘We have had a very good overall stability for the past two years, and we believe we have minimised the impacts related to the COVID-19 virus.’

‘The good figures [were] the result of increased move count in some services, some extra-loader calls to take care of overflows and not necessarily the addition of new services. While some trade lanes’ compositions have changed, that is not the general trend,’ commented MIT gm Stacy Hatfield.

‘One important factor in Panama’s favour has been the un-interrupted provision of port services including stevedoring, ship husbandry and intermodal work. Panama’s support of crew changes has also assisted ship owners and operators with their vessel management.’

PSA-International Panama grew by 1.9% to 1.22m teu, almost on par with 2020. ‘As far as next year is concerned, outlook seems to indicate we will not be out of the bushes yet. Congestion, ‘Just in Case’ and the Union negotiations in the US West Coast are big questions marks which will have an important effect on volumes,’ said Alessandro Cassinelli, PSA-Panama general manager.

Last year has seen many changes and particularly in the supply chain and logistics, coupled with the congestion of the US ports. ‘Dwell time of transhipment units has spiked in the beginning of the year having a negative impact on the operations. The lack of ships has also impacted when extra calls sweeping the long staying cargo were not available,’ he added.

Cristobal, on the Atlantic side administrated by Hutchison’s Panama Port Company registered a small decrease of 2.6% to 1.04m teu.

Last year Cassinelli’s comments ‘we will not be out of the bushes’ proved to be dramatically correct as the first quarter of 2022 was disappointing with total volumes falling by 4.60% to 1,993,826teu.

‘Historically we have seen a falloff in volumes after the Christmas holidays in markets we serve, and if sales/ inventory ratios of retailers in the US are any indication, they had a build-up in December which is being burned off now. Since March, we have experienced a couple blank sailings due to Lunar New Year as well,’ explains Shaffer.

For year-on-year comparisons, ‘our volumes at the same time last year did not yet reflect the full impact of the services which we began receiving later last year. So, our YTD volumes in 2022 reflect a new base compared with the same period last year. Having said that, the monthly volumes for the new base have been a bit lower than expected. I expect growth to firm up as we move forward during the year,’ adds Shaffer.

Looking at possible forecast for this year, since the logistics providers and buyers of goods have been in ‘pandemic mode’ for nearly two years now, ‘I would expect some moderation or normalisation of volume levels as they consolidate and capitalise on the lessons learned from the past two years. That could spell lower year-on-year growth rates until carriers are able to put more bottoms into the water to meet higher levels of demand being driven by structural changes brought about by the pandemic.’

Panama Ports’ Zerbe considers it is very difficult forecasting the future because there had been so many recent disruptions, but he sees 2022 as last year, maybe with a range of -2% or -3% . ‘We will grow in volumes as one or two customers from other ports may come to Panama and we are confident that Cristobal will be fine.’

‘Main reason to the flat growth of this year, which is possibly expected until the end of it, is due to the pressure on yard capacity caused by the worldwide congestion,’ says PSA-Panama general manager Cassinelli. ‘Transhipment hubs, such as Panama, are no different from the Chinese, European or US final destinations ports. The pileups of containers caused by the higher-thannormal dwell times are reducing the ability to have a fluid flow of containers at the yard and quay.’

But indeed ‘the Asian congestion, mainly the Chinese one, will continue having repercussion on the global Supply Chain. In April in Shanghai containers were waiting on average for 12.1 days at the port before they are picked up by truck. This is almost the triple of the waiting time in March. This delays the further reloading process and slows down the entire supply chain,’ he comments.

Many port operators in Panama believe the conflict Ukraine-Russia have a ‘marginal effect’ on their operations.

But for Shaffer, ‘two recent variables that have been introduced into the mix for the business early this year are the likely negative impacts of another shutdown of manufacturing in China due to the latest outbreak of COVID-19, and political uncertainty stemming from a war in Ukraine. The former is something we experienced in early 2020 and from that experience we could say it will be temporary. The latter is something the likes of which we have not seen in a long time. Even though we are physically far away from the current conflict, we are nonetheless in a geopolitically important location with critical infrastructure that keeps the wheels of global commerce turning, and far off problems between global powers can bring unexpected consequences it to our doorstep quickly.’

For the new general manager of Manzanillo International Terminal (MIT) Manuel Pinzon, ‘the supply chain problems have increased while trying to reactivate the economies affected by the COVID-19 pandemic.’

Manuel Pinzon took the reins of the largest container terminal in the Atlantic side, as Stacy Hatfield becomes the head of business development at Carrix, in Seattle.

He was MIT vp of operations since 2017, port administrator in 2016 after having joined MIT in 2014. A deck officer, Pinzon sailed on Evergreen vessels from 1995 to 1999 when he became director of operations at Hutchison´s Panama Ports until 2014.

‘Today we are facing another year of major challenges in the global supply chain because of the pandemic, and at the beginning of 2022 this has affected volumes at Panamanian ports. In the specific case of MIT, based on information from the shipping lines about changes in their services, since the end of 2021 we were able to estimate a decrease in the volume of container cargo handled during 2022.’

‘The current soaring demand, pandemic and other factors driving the current supply problems are not expected to go away in 2022, and shortages of certain materials and products are likely to continue, especially with the conflict situation in central Eastern Europe today. In addition to the macro situation, MIT expects the downward trend of the first few months of 2022 to remain constant for the rest of the year,’ he believes.

However, ‘we are being conservative considering that the global economic environment has become more challenging especially due to the backlog and the accumulation of inventory at origin ports that will then take priority over other cargoes, which creates a very changing scenario with no defined patterns. For MIT, the forecasts made at the end of last year on 2022 volumes seem to be close to the current reality.’

Panamanian ports, with a 14m teu capacity, are not facing a saturated offer.

As a port operator who declined to be named, says, ‘we have not seen drastic increases in volumes – or intention from the Liners to pump much more than what they have done so far – since the opening of the new locks. Once that happens, we may start thinking of new capacity. Prior to this it would only be an opportunity to cannibalise existing volumes.’