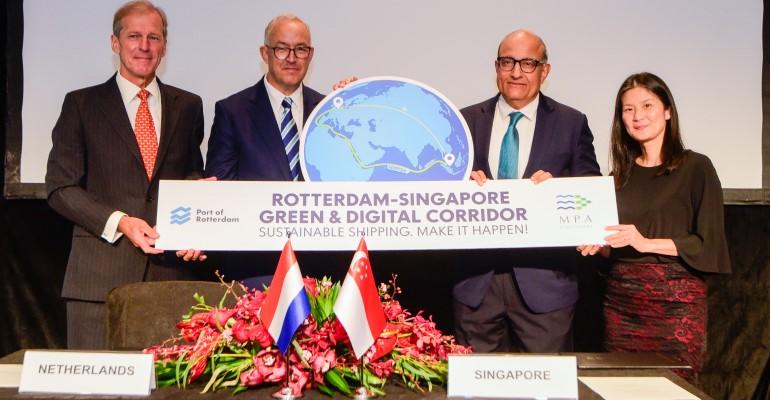 Work is getting underway on the Singapore – Rotterdam green and digital shipping corridor with the initial focus on the digital component and on-time-arrival.

Agreement to create the world’s longest green corridor was reached in early August and the first meeting of parties involved held this week in Singapore.

“We are aiming to connect to the Port of Rotterdam to Singapore focusing on efficient flows, efficient data exchange, as well as the availability and the production of green fuels,” Renske Schoenmaker, Senior Business Manager Deepsea, told Seatrade Maritime News in an interview on the sidelines of TOC Asia.

While new low or zero fuels for the green component of the corridor are not yet available at scale, and the future fuel mix remains unknown, the digital component is seen as a much more immediate way to reduce emissions, ahead of the move to green fuels.

With CII and EEXI regulations coming into force from the IMO next year shipowners and operators have a need to reduce emissions in the near term while the first low and zero emission fuel vessels are only just being ordered. “We believe that especially in the digital part, there is so much to win still,” Schoenmaker said, noting with just 12 hours notice of arrival of a vessel, and using all the data available to optimise just-in-time arrival over 4% can be saved on emissions.

In terms of what is required for the system to work all parties already have the data needed,  but the complexity comes in the sharing of data and having the same definitions and segments.

“The nice thing is it's baby steps, and every baby step will have an effect on the on the emissions,” she said.

Setting up a single digital corridor between ports involving all the parties is seen as a way of producing concrete results that can then be rolled out to the wider market.

Martin Thijsen, Head of Ecosystem and Platform Play – Digital Strategy and Transformation for the Port of Rotterdam, explained: “We want to do this between Singapore and Rotterdam and set the framework. It's all open, nothing is secret. It's not container, it’s not trade lane Singapore – Rotterdam only, it only works if it's scalable and open to all, we want to make the framework first between the two ports, and then expand and extend.”

Seatrade Maritime News first reported on discussions about the green corridor during an interview with Allard Castelein, CEO of the Port of Rotterdam, on the Seatrade Maritime Podcast earlier this year. Listen to the interview in the player below:

The initial digital corridor for just-in-time arrival between Rotterdam and Singapore is expected to take nine months to a year to bring to fruition, and then it can be used a model to scale up onto other trade lanes.

In terms of alternative fuels on the corridor Schoenmaker expects to see trial voyages by 2023, although these will not be using 100% green fuels, and the Port of Rotterdam is already the top biofuels port in the world, however, biofuels usage only acts to reduce emissions.