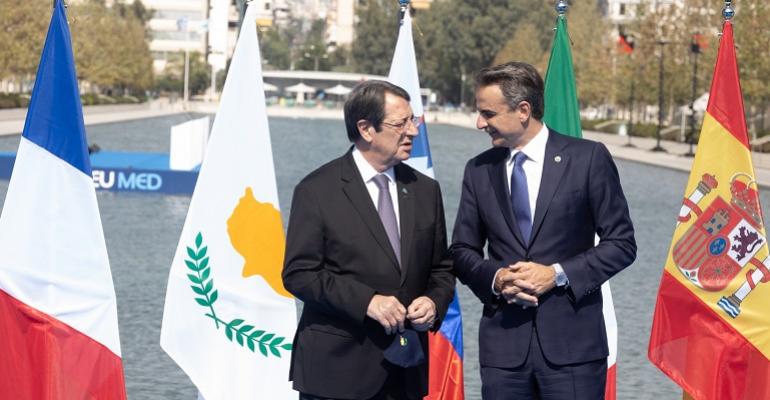 The President of the Republic, Mr Nicos Anastasiades, arrives at Stavros Niarchos Foundation Cultural Center for the EUMED Summit, in Athens, Greece.
President of Cyprus Nicos Anastasiades has praised the resilience of the shipping sector and its contribution to the Cypriot economy despite the adverse conditions caused by the Covid – 19 pandemic.

Speaking during a dinner hosted by the Cyprus Union Of Shipowners (CUS) in Athens, 16 September, Anastasiades said shipping represented 7% of the country’s GDP and that the Cyprus-flagged commercial fleet had recently passed a gross tonnage of 25m.

The upward trend of shipping companies relocating to Cyprus was also mentioned. The President said this was “a vote of confidence in government policies that aim to enhance the services provided to shipowners, shipping magnates and ship management companies”.

“What I would like to emphasise is that, within the framework of European Union guidelines, the government is always vigilant in assessing and implementing tax and other incentives, always on the basis of your own suggestions,” said Anastasiades.

“We are fully aware that in order to maintain and further strengthen the competitiveness of the Cypriot shipping sector, it is necessary to create strong cooperation links between the regulatory authorities and the shipping industry,” he said.

Related: EU Fit for 55 not fit for shipping: Cyprus Chamber

Anastasiades also outlined the government’s vision for the shipping sector, with flexibility, competitiveness and modernisation being key objectives. “The plan includes 35 targeted actions while adapting the organisational structure and the practices of the Deputy Ministry of Shipping to the challenges and emerging opportunities to ensure a sustainable future for Cypriot shipping,” said the President.

Part of this plan included legislation for limited liability shipping companies, which the government was in the process of finalising and submitting to parliament.

Anastasiades pledged the government will strengthen the staffing of the network of shipping offices of Cyprus abroad, create a user-friendly electronic maritime library, create a dedicated electronic helpdesk that will act as a single point of contact for all shipping company requests, as well as providing financial tools to encourage research and innovation in shipping.

The government’s sensibility to its shipping partners was also displayed through its immediate response to the humanitarian issue of repatriating seafarers who found themselves trapped, due to the pandemic, and allowing crews to change. More than 25,000 seafarers were repatriated from Cyprus ports, Anastasiades noted.

He also said that 40,000 seafarers employed in Cyprus-flagged ships or ships managed from Cyprus, got the jab through the government’s national vaccination programme.

He said the shipping tax framework, which has the approval of the European Commission, has been recently strengthened with additional incentives for environmentally-friendly vessels, in an effort to reward shipowners’ efforts to meet the challenges of green transformation.

Andreas Hadyiannis, CUS president, said: “We are all witnesses to President Anastasiades and his government’s prioritisation of shipping industry issues and we have acknowledged the president’s exceptional ability to promote the interests of both the Cypriot economy and Cypriot shipping.

“It is paradoxical that the European Union has not given shipping the status it deserves,” he said, adding: “The EU cannot properly play its international role if it does not safeguard the competitiveness of its merchant fleet.”