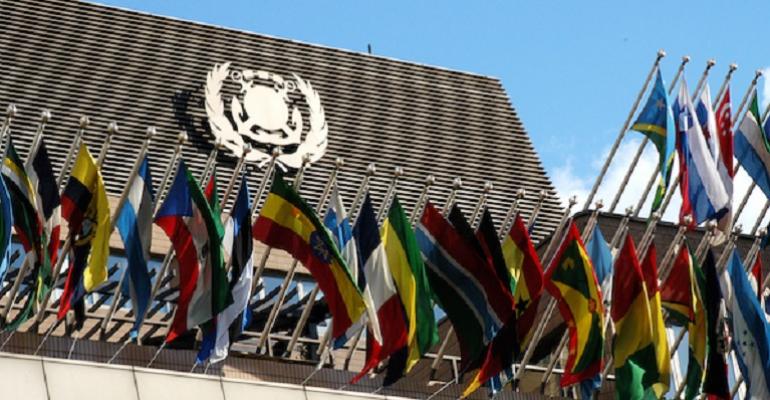 The results of an IMO intercessional on reducing Greenhouse Gas (GHG) emissions met with sharp criticism from environmental groups and a mixed reaction from shipping industry organisations.

A joint statement said the draft text to be forwarded to the IMO Marine Environment Protection Committee (MEPC) meeting on 16 – 20 November, “did not cap, let alone reduce, shipping emissions this decade”.

Related: ICS calls on Sea Cargo Charter to be aligned with IMO requirements

The groups said the ‘J/5 proposals’ violated the IMO GHG strategy in failing to reduce emissions before 2023, would not peak emissions as soon as possible, does not set ship CO2 emissions on a pathway consistent with the Paris Agreement goals.

“We urge all countries to reconsider their support for the J/5 decision ahead of MEPC75 this November 16-20, and reject it, unless it can be fundamentally strengthened, said John Maggs, president of the Clean Shipping Coalition, which has observer status at the talks.

Related: Call for global measures through IMO on reducing CO2 emissions from shipping

By contrast the International Chamber of Shipping (ICS) was positive about the outcome of the meeting and said it was confident the new package of technical and operational regulations will be formally agreed by the MEPC in November 2020, for entry into force in 2023.

“This agreement made by governments demonstrates to the world that the shipping industry is firmly on track to meet the ambitious IMO CO2 reduction targets and ultimately being a zero emissions sector,” said Guy Platten, ICS secretary general.

“The willingness of governments to cooperate and achieve consensus in the very difficult circumstances of a virtual meeting is to be applauded, and we are pleased that the proposals supported by ICS, in co-operation with a wide range of governments on all sides of the debate, forms a central part of the agreement.”

“Industry needs certainty, and this agreement provides a clear signal about the investments we need to make to further reduce our emissions, and ultimately becoming a zero emissions sector.”

Danish shipowners organisation Danish Shipping said the agreement that the working group was now sending to the IMO, “does not bring much joy to Danish Shipping”.

Maria Skipper Schwenn, director of safety, environment and maritime research at Danish Shipping, said: “At first glance, this is a disappointing result and we must simply note that, unfortunately, the IMO’s Member States were unable to deliver the goods this time.

“This is worrying for Danish shipping companies, which are clearly calling for an enforceable regulation. It should promote innovation and the transition towards CO2 neutrality, and also take into account small and large shipping companies and different types of ships.”

Shipowner organisation Bimco appeared to sit on the fence on issues around carbon efficiency measurement noted associated guidelines still needed to be agreed before the impact on the fleet was assessed.

“Some countries and organisations have expressed that the outcome of this week’s deliberations fail to meet the ambitions of the IMO initial strategy and the Paris Agreement. To this we can only say: we don’t know. Because important elements are still missing, it is impossible to judge the effect,” Bimco said.

“The IMO initial strategy’s ambition to improve carbon efficiency of the fleet by 40% by 2030 compared to 2008 is silent on how carbon efficiency shall be measured. Thus the 2030 ambition may, or may not, result in lower total emissions from the fleet – it all depends on the metric chosen and resulting change in operational behaviour of ships.”