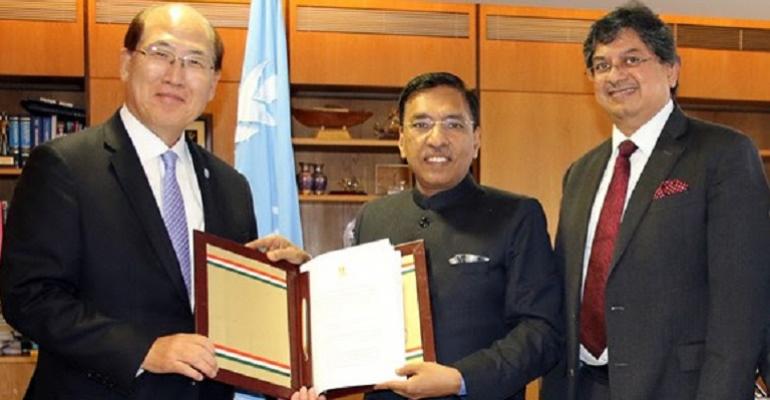 India, one of the world’s largest ship breaking nations, has become the 15th state to accede to the Hong Kong Convention.

India is the first of world’s five countries that, between them, account for over 98% of all ship breaking by gross tonnage to sign up to the IMO’s Hong Kong International Convention for the Safe and Environmentally Sound Recycling of Ships, 2009. The other four  - Bangladesh, China, Pakistan and Turkey - have yet to accede to the treaty that seeks to set global standards for safe and environmentally sound ship recycling.

Related: A decade on - IMO Hong Kong Convention on ship recycling is a long way from ratification

Gopal Krishna, Secretary to the Government of India, Ministry of Shipping, and Amitabh Kumar, the country’s Director General of Shipping (DGS), deposited the instrument of accession to the treaty with IMO Secretary-General Kitack Lim during the just-concluded 31st session of the IMO Assembly.

Welcoming India's accession, IMO Secretary-General Lim urged other States, in particular those with a considerable ship recycling volume, to become Party to the treaty as soon as possible.

“What happens to ships at the end of their lifetime is an important global issue, with major consequences for safety and the environment,” said Lim. “I urge all countries yet to do so, to ratify this important convention so it can enter into force and provide a consistent, global regulatory regime for this vital industry.”

Speaking on India’s decision to embrace the HK Convention, Guy Platten, Secretary General of the International Chamber of Shipping (ICS), the principal global trade association for shipowners and operators, said, “ICS welcomes the accession of India to the Hong Kong Convention.

“This is a major step towards guaranteeing the safe and environmentally sound management of ship recycling throughout the ships entire lifecycle. We are hopeful that it will spur other major recycling States, particularly China and Bangladesh, to ratify and make the Convention a reality as soon as possible.”

India’s DGS, Amitabh Kumar, added, “We have ratified the HK Convention; and this significantly increases the likelihood of its coming into force. The Convention will ensure that ships are recycled in a safe, environmentally friendly and transparent manner, providing global oversight to an economically and environmentally essential industry.

“India is a major ship recycling nation; and, in 2018, received more than 250 vessels of almost 5 million gross tonnes – amounting to 25-35% of the world's recycling tonnage. The decision, therefore, by the Government of India to begin steps towards ratifying the HKC is a significant one.”

The Contracting States to the HK Convention are as of end-November 2019: Belgium, Congo, Denmark, Estonia, France, Germany, Ghana, India, Japan, Malta, Netherlands, Norway, Panama, Serbia and Turkey. Between them, they represent just over 30% of the world’s merchant shipping tonnage.

The treaty will enter into force 24 months after three separate criteria have been met. It must be ratified by 15 States – but these States must represent 40% of world merchant shipping by gross tonnage, and a combined maximum annual ship recycling volume (during the preceding 10 years) of not less than 3% of their combined gross tonnage.