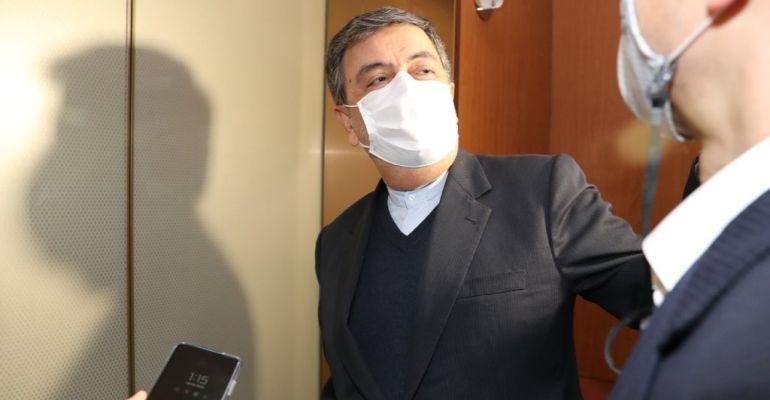 Iranian ambassador Saeed Badamchi Shabestari heading for a meeting with a South Korean official over Tehran's seizure of a Korean tanker
South Korea has called on Iran to release a South Korean oil tanker seized in the Strait of Hormuz by Navy of the Islamic Revolutionary Guard Corps, it was reported.

Koh Kyung-sok, director-general of the Korean Foreign Ministry’s African and Middle Eastern Affairs, met with Iranian ambassador Saeed Badamchi Shabestari in Seoul on Tuesday to call for the release of the oil tanker and its crew members, Yonhap news reported.

The ambassador was reported saying that all the crew members “are safe”, but declined to elaborate further.

The 2000-built, 17,427-dwt handysize tanker Hankuk Chemi was seized by Iranian forces on 4 January due to allegations of chemical pollution. DM Shipping, operator of the vessel, denied that it had broken any marine environmental rules, Bloomberg reported.

The ship was carrying five South Koreans, 11 Burmese, two Indonesians and two Vietnamese, en route Saudi Arabia to the UAE. The ship was taken to Bandar Abbas port by the Iranian guard corps, according to Fars News Agency.

The detention of the oil tanker came amid tensions between Seoul and Tehran over Iran’s financial assets frozen by Seoul in line with US sanctions, with Tehran considering to propose to Seoul that the two countries barter the frozen money for Covid-19 vaccines and other goods.

Iran’s assets at two Korean bank accounts were reportedly worth up to $7bn in total, and they have been frozen since September 2020 under US sanctions.

In recent months, Seoul has been pushing to resume the trade of humanitarian goods such as medicine and medical equipment to help Iran tackle the Covid-19 crisis, prompting Tehran to moot the barter deal.