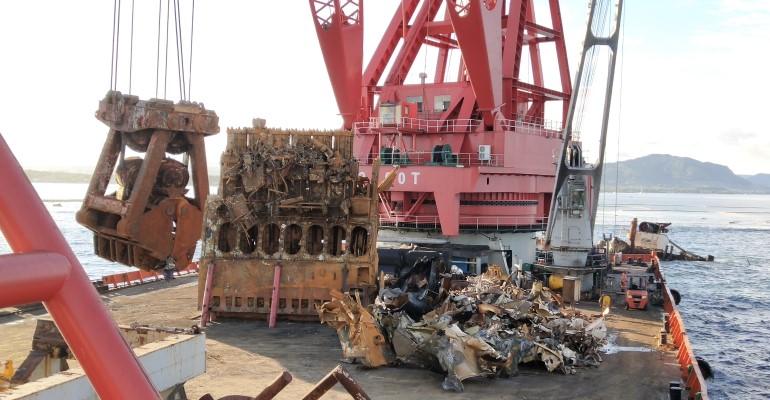 Lian Yuangang Dali has completed its four-month operation to remove the wreck of Wakashio off Mauritius.

Offshore operations finished on 16 January 22 to remove the wreck of capesize bulker Wakashio, which was chartered by MOL from Nagashiki Shipping, ran aground off Mauritius on 25 July 2020 and later cracked and split in two, spilling over 1,000 tonnes of bunker fuel into the pristine waters and coral reefs around the island.

Germany-based Brand Marine Consultants (bMC) was consulted on the removal of the stern section of the wreck; the bow section was towed to deep water and scuttled in August 2020.

bMC said the final stage of the removal involved recovery of debris up to 500 metres from the stern site, marking the end of a challenging 30.7 days of crane operation at the site.

Senior bMC consultant Captain Ajay Prasad, said: “The sea conditions at the site have been difficult as expected. Added to that, the team have had to manage logistics in this remote location and considering some of the restrictions brought about by the pandemic, it’s added another layer of problems for us all to solve. But, after a huge effort by the whole team, we are there.”

Crane barge Hong Bang 6 operate in shallow, high energy waters to dismantle the wreck piece-by-piece with a grab. Pandemic delays and delays in getting equipment to the site pushed the removal across two seasons. The removal was initially scheduled for completion in spring 2021.

Adeline Goh, Naval Architect of bMC said: “Getting the main engine of the Wakashio out was a real buzz. After months of planning and countless hours of modelling and calculations, to see the 600 ton engine safely sitting on the deck of the Hong Bang 6 was a proud moment”.

bMC expects it will take another month for shoreside operations to conclude. Scrap metal from the wreck needs to be dismantled and transported to a smelting facility. Hong Bang 6 is due to be loaded onto a semi-submersible and taken back to China.

bMC managing director Captain Dennis Brand, said: “I’m proud of the whole team here and I thank them for all their efforts. Lian Yuangang DALI have done a great job. So have every one of the contractors working on the project. The Mauritius people and numerous Island companies have lived and breathed this project with us. Without their support and patience, the job would not have been possible, and I am glad that things can go back to normal now.”