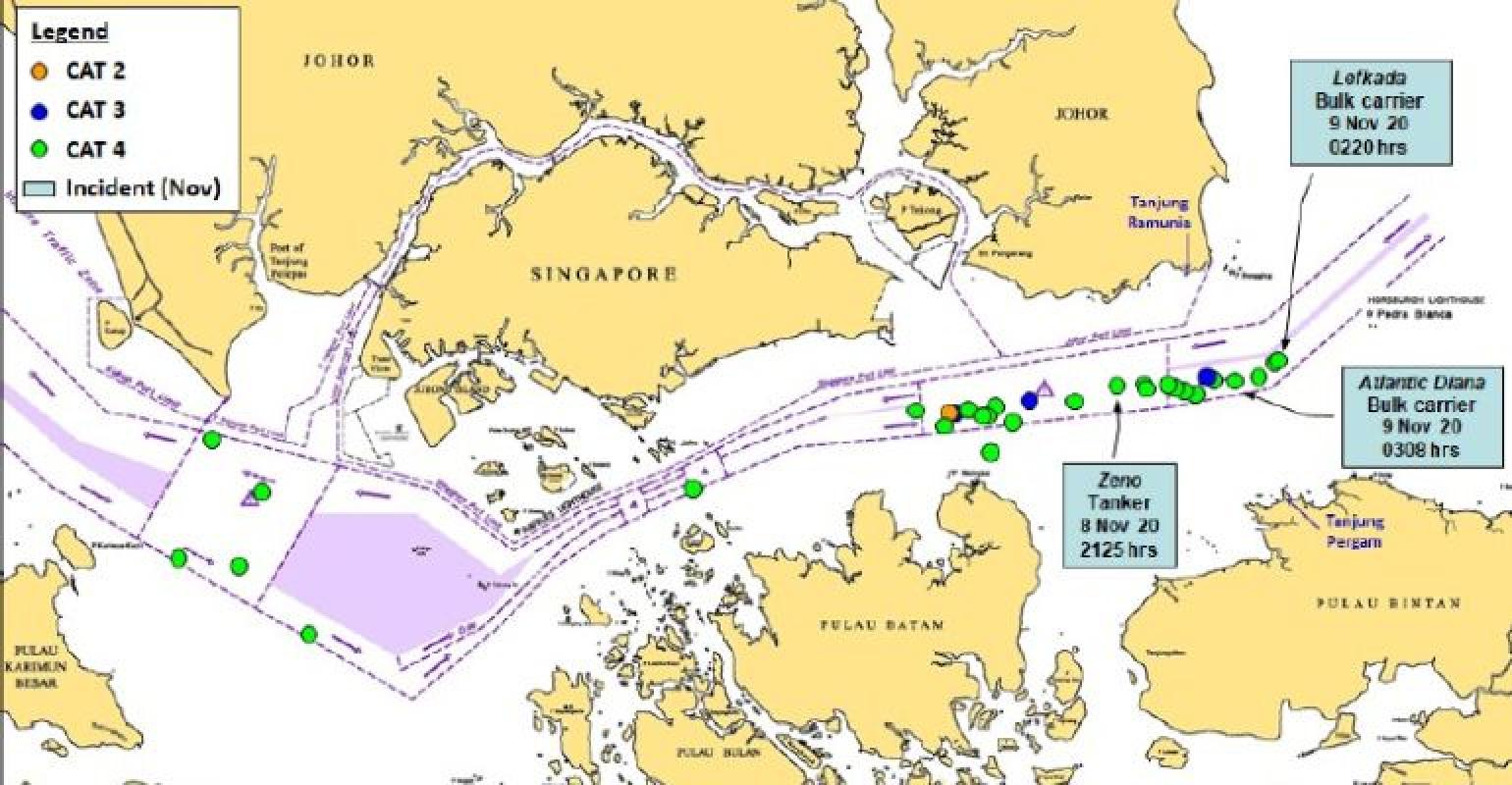 Approximate location of the 31 incidents occurred during January-November 2020
Armed robbers have boarded three ships transiting the eastbound lane of the Traffic Separation Scheme in the Singapore Strait within an interval of six hours during 8-9 November, according to ReCAAP Information Sharing Centre (ReCAAP ISC).

In all three incidents, there was no confrontation between the perpetrators and the crew. Ship equipment and a lifebuoy were stolen in two of the incidents and nothing was taken in the other incident.

The first incident took place on 8 November at around 2125 local hours, where three armed robbers were sighted in the engine room of the tanker Zeno. The alarm was raised and a search was subsequently conducted onboard the tanker. By about 2305 hours, the master updated the Singapore Vessel Traffic Information System (VTIS) via VHF that there was no further sighting of the intruders.

The second incident happened on 9 November at around 0220 hours on bulk carrier Lefkada. Two perpetrators were sighted near the engine room locker and the alarm was raised. By about 0340 hours, the master updated Singapore VTIS that there was no further sighting of the perpetrators onboard.

The third incident occurred on 9 November at around 0308 hours on bulk carrier Atlantic Diana, when one perpetrator was seen near the steering gear flat. The alarm was raised abd by around 0755 hours, the master updated Singapore VTIS that the intruder was no longer sighted.

With the latest three incidents, a total of 31 incidents have been reported in the Singapore Strait since January 2020, of which 27 occurred in the eastbound lane of the Traffic Separation Scheme.

“In addition to asking the shipping community to exercise upmost vigilance, we also urge the littoral states concerned to take enforcement actions to apprehend the perpetrators - without which the spate of incidents is likely to continue. All incidents, however ‘moderate,’ should not be ignored because the lack of arrests can embolden criminals to escalate their crimes,” warned Masafumi Kuroki, executive director of ReCAAP ISC.