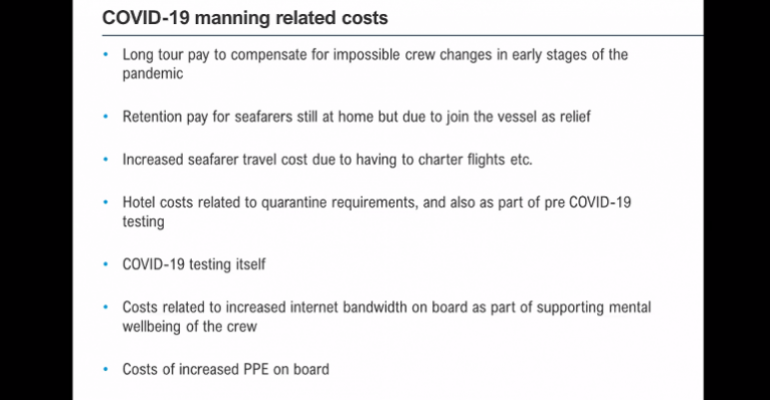 Crewing costs are expected to rise in the region of 10 – 15% this year due to the Covid-19 pandemic according to consultants Drewry.

“We are expecting the impact of Covid-19 to be significant this year with somewhere in the region of 10 – 15% additional to a normal year’s manning cost,” Rhett Harris, who works with Drewry on survey and consulting, told the CrewConnect Europe Virtual Event on Tuesday.

Harris outlined seven key areas which are resulting in the estimated 10 – 15% increase in costs this year, with much of it related to the difficulties owners and managers are experiencing in the change-over of crew, which has evolved into a full blown crew change crisis over the last six months.

Explaining the results of its surveys Harris said: “What we are finding from them is they[ companies] are very keen to keep seafarers employed and do the best they could, obviously within the constraints of budget.”

The difficulties in undertaking crew change have resulted in seafarers serving far beyond their contracted period onboard and companies are making additional payments to compensate.

“We’re seeing in part these total costs are due to long tour pay which is compensating crew for impossible crew changes at first, but also now. So that will be partly contractual but also discretionary,” he explained.

For every seafarer stranded at sea beyond the end of their contracted period there are also crew stuck at home unable to start their new contracts and losing earnings as a result, and some companies are paying retention pay to these seafarers.

“We’ve actually heard its reasonably common for Filipinos, so companies have been paying up to 50% of wages for seafarer still at home as retention goodwill. Hopefully that will continue, but there is an affordability aspect,” Harris said.

There are also significant increased travel costs, which can include charter flights for seafarer repatriation given the lack of commercial passenger flights.

Companies face additional hotel costs for seafarers awaiting repatriation and for quarantine periods ahead of signing on. For example V.Group has block booked 160 hotel rooms in Manila for quarantine purposes.

There are cost of Covid tests for seafarers both leaving and joining vessels. “We heard in the early stages a test was costing in excess of $200, that has now come down but it is obviously still a significant element,” Harris said.

As part of crew welfare for seafarers stuck onboard vessels companies have increased their internet bandwith to allow seafarers more time to connect with families and loved ones back home.

Finally, there is the cost of PPE for vessels, although Harris noted there were many other extra costs beyond the seven areas he listed.