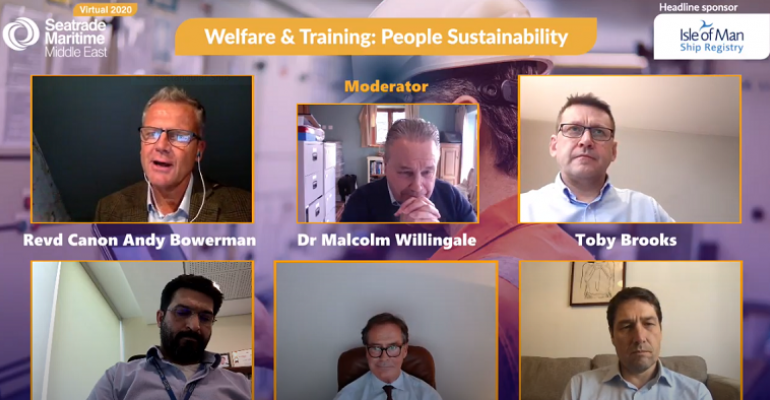 The problems of attracting young people to take up a career as seafarers had been long debated, even before the Covid-19 pandemic and the crew change crisis left hundred of thousands of seafarers stranded onboard vessels.

The poignant question of the impact of the pandemic on the attractiveness of seafaring as a career was asked by a member of the audience during the virtual conference session ‘Welfare & Training – People Sustainability’ part of Seatrade Maritime Middle East Virtual.

The impact of pandemic on crew change and the problems encountered by seafarers was explained by Toby Brooks, Deputy Director - Isle of Man Ship Registry.

Related: Planning crew change when ‘what is possible today, may not be possible tomorrow’

“We’ve experienced first-hand the crew repatriation crisis, our attempt to review each case and support the needs of our seafarers have in some cases revealed a common truth. I think we’ve noticed in many ports there’s a clear disconnect between the maritime authorities and the border control authorities within the same country,” Brooks explained.

“Port State Control efforts to enforce contract lengths to the letter of the MLC are not always in tune with the border controls that have been put in place and often disregard the travel plans the shipowner or manager has put in place so well planned crew change arrangements have been thrown into disarray and even suffered detentions as a result.”

So how does this complex situation, that at its height impacted 400,000 seafarers and has seen some crew serving up to 17 months onboard impact the attractiveness of seafaring as a career.

Matt Dunlop, Group Director HSEQ & Technical for V.Group, painted a less than rosy picture of seafaring even without the pandemic. “We’re seeing continued piracy in the Gulf of Guinea. We’re seeing kidnappings week after week. We’re seeing environmental spills where the Master is led down the gangway in handcuffs…this is sending out a bad image of our industry, our industry does a fantastic job.”

Taking into account the pandemic Dunlop asked, “Is our industry attractive? It wasn’t pre-Covid now during Covid with our seafarers overdue by months and some seafarers are spending the second Christmas onboard the same ships. These ladies and gentlemen have an option, they’ll go home to their families and say, ‘Why bother?’

“As an industry we need to make sure with retention in mind we do everything we can with hearts and minds to make sure we support our seafarers throughout this process in order to retain them and bring them back when they are rested and ready to go.”

Capt Anwar Buftain, Team Leader Fleet Personal Group - Kuwait Oil Tanker Company (KOTC), said in terms of the pandemic it was a matter of approach and with vaccines coming out it should be a temporary issue, but sees more underlying issues with the attractiveness of seafaring as a career.

Capt Anwar believes many see seafaring as a temporary move to gain money or experience before moving into a shore job.

The failure, despite great efforts by the industry, to get seafarers recognised as key workers was highlighted by Revd Canon Andy Bowerman, Regional Director, Middle East and South Asia for The Misson to Seafarers.

“There is a real opportunity here for the collective industry to grasp. Seems to me a there is a global question of how do we ensure seafarers are actually seen as the key workers they are?

“How do we as an industry maintain the momentum that during in the pandemic its seafarers who’ve ensured you’ve got enough of what you’ve needed, and they’ve continued to work, and yet are nine months in we’re still debating whether they are seen as key workers,” he said.

Raal Harris, Group Creative Director for Ocean Technologies, pointed to some of the positive aspects of seafaring as a career.

“We shouldn’t underestimate the motivational power route to happiness of having a job that really matters and having a real sense of purpose and this is what we’re seeing with seafarers as key workers it elevates that status to its rightful position. We are seeing people outside this industry start to understand that and I think that is something we can really build on,” he said.

However, Harris also made the point that the combination of skills required of modern seafarer, including digital, communication and leadership were high sort after in many industries. “We are looking for candidates that will really have options….these are people who everybody wants.”

Vaccination offered to all seafarers on Panama-flagged vessels
Dec 06, 2021