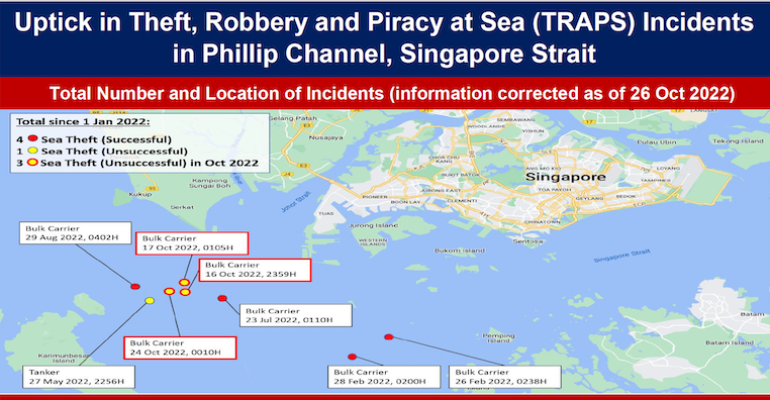 There has been an increase in the number of incidents of theft, robbery and piracy against ships in the Philip Channel in the west of the Singapore Strait this year.

Singapore’s Information Fusion Centre (IFC) said there had been eight incidents in the Philip Channel up to 26 October this year, compared to three in the whole of 2021. There has been a noted uptick in the number during October with three of the eight incidents taking place since 1 October.

Of the eight incidents, involving seven bulkers and one tanker, four were successful while the other four were unsuccessful.

IFC observed that based on past trends opportunistic boardings in the Philip Channel would continue in the months of November and December leading up to the festive season.

Related: Singapore Strait armed robberies rise in first half of 2022

The incidents involved three to six perpetrators, who avoided confrontation fleeing on being sighted by the crew.

The same group of perpetrators may try and board more than one vessel in succession.  “Vessels are encouraged to report any sightings to the local authorities timely, in order to avoid subsequent boarding attempts,” IFC said.

The majority of armed robbery incidents in the Singapore Strait in recent years have taken place in the eastbound lane close to the Indonesian islands of Batam and Bintan. In the first half of 2022 ReCAAP ISC reported that 19 of 27 incidents in the busy shipping lane were in this area.