Over 50% of Asia armed robbery against ships in Singapore Straits 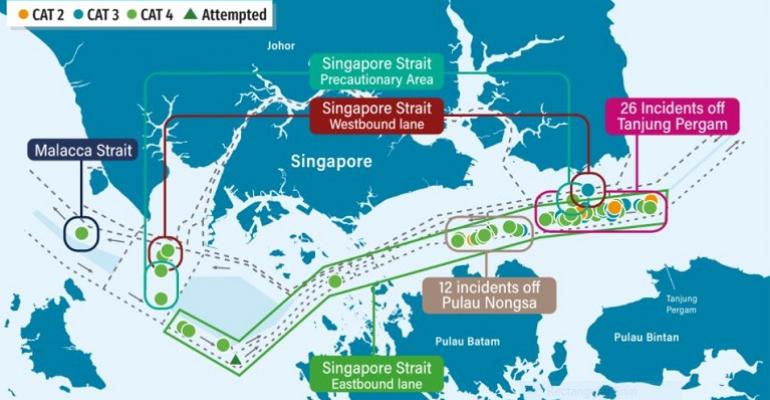 The Singapore Straits accounted for over half of all piracy and armed robbery incidents against ships in 2021, according to the ReCAAP Information Sharing Centre (ISC).

Presenting its annual report ReCAAP said there wre total of 82 incidents of piracy and armed robbery against ships reported last year, a decrease of 15% compared to 2020. It was also the second lowest number of incidents in the 15 years that ReCAAP has been in operation.

“The overall situation in Asia in 2021 has improved compared to 2020,” Masafumi Kuroki, Executive Director of ReCAAP ISC, told an online media briefing on Tuesday.

However, a continued increase of incidents in the Singapore Straits saw it accounting for more than half of attacks in Asia last year with 49 some incidents, compared to 34 in 2020. It is the second highest number off incidents in the key waterway in the last 15 years, with a high of 99 in 2015.

The vast majority of incidents, 43, were in the eastbound lane of the Singapore Strait in Indonesian waters with 26 clustered around Tanjung Pergram at the eastern entrance to the waterway.

“I hope this increasing trend from 2019 will be stopped as early as possible,” Kuroki said.

“We have recommended to strengthen their [Singapore, Malaysia and Indonesia] coordination, and also to respond promptly to incidents reported by ships and arrest, and prosecute the perpetrators because the arrest of the perpetrators is a very importance deterrence.”

So far in 2022 there have been four incidents in the Singapore Strait, two of which were in the eastbound lane of the Traffic Separation Scheme.

As to what has caused the increase in incidents in the busy waterway Kuroko said: “The Covid-19 pandemic has caused a deterioration of the economic conditions in many areas and regions, and I think that is one of the main reasons why incidents increased in the Singapore Strait.”

Another area that saw rise in incidents in 2021 was at anchorage in Manila, Philippines with nine incidents. “Particularly what was concerning to us was the treatment of crew. We saw several incidents occur with violence against the crew,” he said.

In three incidents guns were point at crew and seafarers tied up, and in another incident there was an attempted stabbing of a seafarer.

“We worked closely with the Philippines authorities to address this situation, to prevent the escalation of the situation,” Kuroki said. The Philippines arrested two members of a criminal syndicate behind the attacks in September and November, and no further incidents have been reported since September last year.