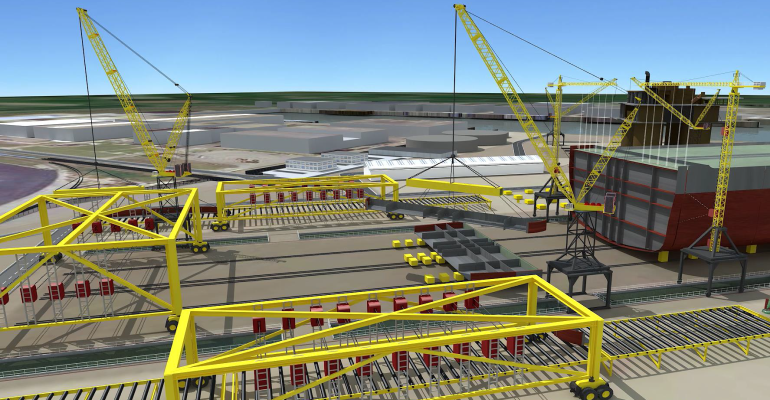 An entirely new ship dismantling technology currently under development in the Netherlands could get round current regulations preventing many owners from selling end-of-life ships to recycling yards on the Indian subcontinent.

Based on complete ‘circularity’, highly automated procedures and no direct human involvement, a pilot recycling facility could be up and running by the end of next year, according to Aseco Europe BV director and founder of Circular Marine Technologies International (CMT), Frank Geerdink.

The first yard, likely to be located in the south west of the Netherlands, will first take a 3,000 light displacement ton (ldt) ship for recycling, followed by a larger 8,000 ldt unit, Geerdink said, for proof of concept. Circularity refers to an industrial system which ‘designs out waste and pollution, keeping products and materials in use, and regenerating natural systems’, according to the Ellen MacArthur Foundation.

Following proof of concept, two more facilities would then be developed, Geerdink told Seatrade, revealing that he is already talking to potential investors about other recycling sites around the world. Ultimately, the new generation of recycling yards would be capable of taking the very largest marine assets, including ships of up to 455 metres in length. The new facilities could be located close by, or even integrated into newbuilding yards.

CMT has some heavyweight backers. They include the Damen Group, Huisman Equipment, a heavy lift and construction specialist, recycling and logistics company Jansen Group, and Japan’s Sojitz, a multinational trading company established in 2003 as a result of a merger between Nissho Iwai and Nichimen.

Owners with end-of-life ships will be encouraged to bring their assets to the CMT-supervised facilities without being cleaned in any way. The assets will then be brought ashore and sliced into small sections “like a loaf of bread”. Structures will then be washed off with 2,500 tonnes of recycled water to remove debris, residues, oils and chemicals.

All organic material will undergo processing in a pyrolysis conversion unit (PCU) to create LNG, hydrogen and ultimately electricity for the facility, with significant volumes of extra electricity supplied to the local grid. Other metals including aluminium, copper, brass, stainless steel, and bronze will be sold on, and the now-clean steel will be available to make green steel plate for the construction of new assets.

The comprehensive recycling process, the high level of automation overseen by a small number of expert CMT personnel, and the project’s energy self-sufficiency will allow buyers for CMT to pay prices for assets close to those prevailing on the Indian subcontinent, Geerdink said. Meanwhile, the ability to use recycled green steel for new ships, possibly at shipyards nearby, will make the ship construction process far more carbon efficient.

Geerdink is particularly concerned about the welfare of workers in recycling yards. “Workers will no longer have to take blowtorches into ships to cut them, inhaling the fumes as they work,” he declared. “CMT’s alpha unit is destined to become part of eliminating this very dangerous job.”

Under the Basel Convention, shipowners in OECD countries are currently prevented from recycling end-of-life ships, classed as ‘waste’ in legal terms, in non-OECD countries. European owners, meanwhile, must recycle assets in yards validated under the EU Ship Recycling Regulation (EU SRR). Since China left the sector several years ago, there are four recycling countries left – India, Bangladesh, Pakistan and Turkey. About a dozen facilities in Turkey have now been approved under the EU SRR, but none has been certified on the Indian subcontinent.

The EU SRR was drafted in frustration at the delay in entry into force of the IMO’s Hong Kong Convention (HKC), originally adopted in 2009, but still waiting for full entry-into-force criteria to be met. A significant number of recycling facilities in India have been approved under the HKC, but since the two sets of regulation are substantially different, European owners find themselves in another bind.