HomeMaritime NewsShipyardsHudong-Zhonghua lines up LNG-fuelled bunkering vessel and 25,000-teu boxship projects
Live from Marintec China 2019
BROUGHT TO YOU BY 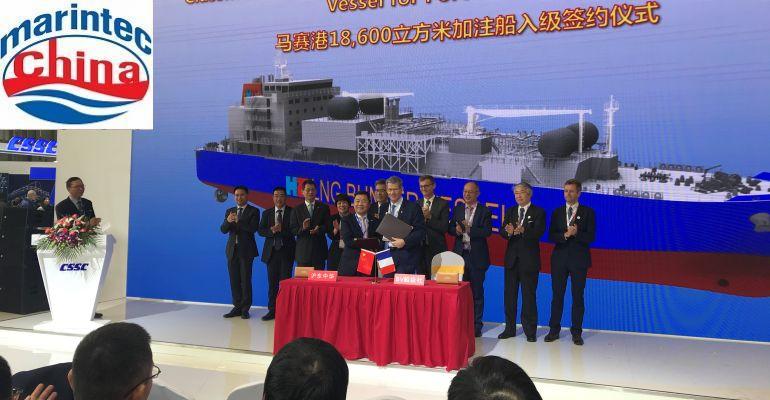 Hudong-Zhonghua Shipbuilding (H&Z) has made progress with its project on a 18,000-cu m large LNG bunkering vessel following a classification contract signing with Bureau Veritas (BV), and lined up another future project to build a 25,000-teu LNG-fuelled containership.

H&Z, a subsidiary of China State Shipbuilding Corporation (CSSC) specialising in construction of large LNG carriers and containerships, announced at Marintec China 2019 in Shanghai on Wednesday that the 18,000 cu m LNG bunkering vessel will serve in the port of Marseilles, France.

“The large LNG bunkering vessel will be able to bunker a range of vessels from ferries to containerships to VLCCs,” a H&Z spokesman said.

“With this AIP, the 23,000-teu containership in the market today is unlikely to be the biggest,” the H&Z spokesman said. “We believe Chinese shipbuilding has reached a new milestone in the construction of ultra large ships.”

Last month, H&Z landed a newbuilding contract from Taiwan’s Evergreen to construct one 23,000-teu containership, albeit not a LNG-fuelled unit.