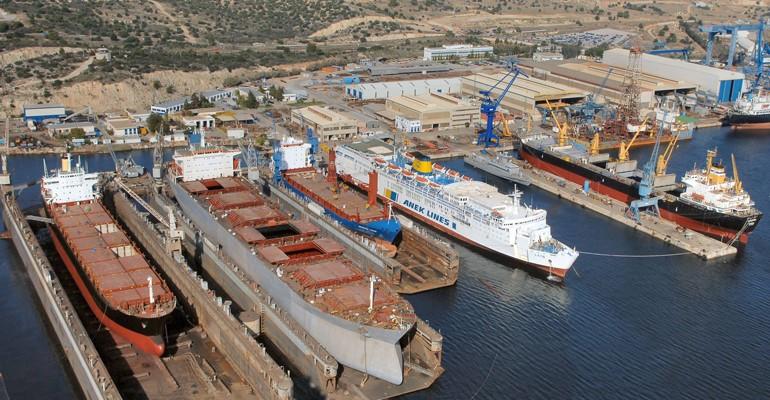 Pending final court approval, an agreement has been signed for the reorganisation and transfer of Greece’s second largest shipyard Elefsis Shipyards, west of Piraeus, which has been basically dormant for a decade.

Onex already controls the country’s most active shipyard, the Syros island-based Neorion Shipyards and the agreement will bring life back to Elefsis.

Georgiadis recalled the history of the investment and named all the authorities involved in its success, including the ministry of National Defense, the Hellenic Navy, the US ambassadors, other government and local officials, as well as the workers “who had first approached him on the island of Syros in 2019” and asked for a similar agreement at Elefsis Shipyards.

“I see the restart of the shipping industry in Greece as a national wager,” Georgiadis said, adding: “It is a pity Greece, such a great power in international shipping, did not have a role to play in the shipbuilding industry. For all these reasons, this is a historic day.”

A delegation of the US-based DFC development bank visited Elefsis Shipyards November 14 and the following day met with Georgiadis. The minister said “DFC’s processes for the funding are continuing normally and without obstacles, and I would even add are ahead of schedule as originally set”.

National Defense minister Nikos Panagiotopoulos said the shipyards would not be solely devoted to a single customer, the Hellenic Navy, but would “support and serve other needs of Greek shipping.”

Xenokostas noted the success at Neorion Shipyards “that many called a ‘miracle,’ and was in essence the start of a new shipyard,” and said that, along with Elefsis Shipyards, would resurrect the sector. “Elefsis is a huge shipyard, with a great footprint in the entire area,” he said, while he also thanked the workers for their contribution to the success of the investment.

The president of Elefsis Shipyards workers’ union, Nikos Papanikolaou, said that it was also historic for the 600 staff, whose demands were guaranteed. The agreement, he said, includes the reimbursement of wages outstanding for the last 12 years, and the restart of work. The agreement was unanimously supported by the workers.