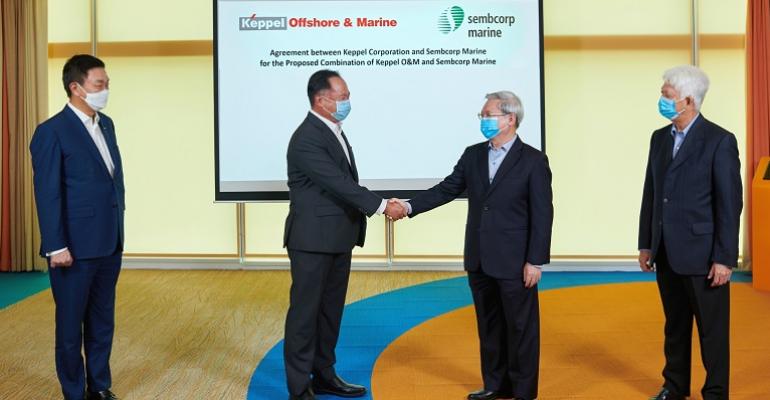 Keppel and Sembmarine shake hands on proposed merger
Keppel Offshore & Marine and Sembcorp Marine have reached agreement on a proposed merger that would focus on renewables and clean energy solutions in the offshore space.

After 10 months of talks the two Singapore offshore marine shipyard groups have agreed terms on a proposed merger. The combination would be based on a 50:50 enterprise value ratio, however, based on capital structures and a SGD500m ($363.75m) payment from Keppel O&M to Keppel immediately prior to closing would see Keppel shareholders owning 56% of the merged company, and Sembmarine shareholders 44%.

Singapore’s Temasek Holdings would be the largest shareholder overall with a 33.5% stake once its holdings in both companies are combined.

The merger will see a new name, and new brand designed to reflect its focus on offshore renewables and clean energy.

“The Combined Entity will be well-positioned to capture opportunities arising from decarbonisation in the oil & gas sector and from the global energy transition towards renewables, particularly in the areas of offshore wind, and new energy sources such as hydrogen and ammonia,” the companies said in a joint statement.

Related: Keppel’s CAN DO drillship – still looking for a customer

Prior to the crash in the oil price at the end of 2014 Keppel O&M and Sembmarine occupied a world leading position in offshore rigbuilding. The sharp downturn in the market left many cancelled contracts and semi-completed rigs. Unsold offshore rigs from Keppel will not be part of the merger and are being placed in an Asset Co that will be 10% owned by Keppel and 90% by other investors.

Shareholders are expected to vote on the proposal in Q4 this year, and if the Sembmarine proposal is successful it will continue to with the share exchange even if the Keppel shareholders vote against. Temasek Holdings will abstain from voting on both schemes.

Loh Chin Hua, CEO of Keppel and Chairman of Keppel O&M, said that the proposal, “Brings together two leading O&M companies in Singapore to create a stronger player that can realise synergies and compete more effectively amidst the energy transition.”

Tan Sri Hassan Marican, Chairman of Sembcorp Marine, said: “I am confident the Combined Entity, with its larger operational scale, broader geographical footprint and enhanced capabilities, will create a leading Singapore player to capitalise on the opportunities in the offshore and marine, as well as the renewable and clean energy sectors.”

The two groups believe they can leverage synergies in the areas of design and R&D, combined track record on deliveries, building a global footprint and integrating operations in Singapore, and generating greater economies of scale.

No details were given on how the various yard facilities operated by the two groups would be merged together although they said they would take a “constructive approach towards labour considerations”.

“Keppel O&M and Sembcorp Marine are committed to working cooperatively with their respective labour unions, including continuing workforce development and training and the creation of higher value-adding jobs,” the two companies said.