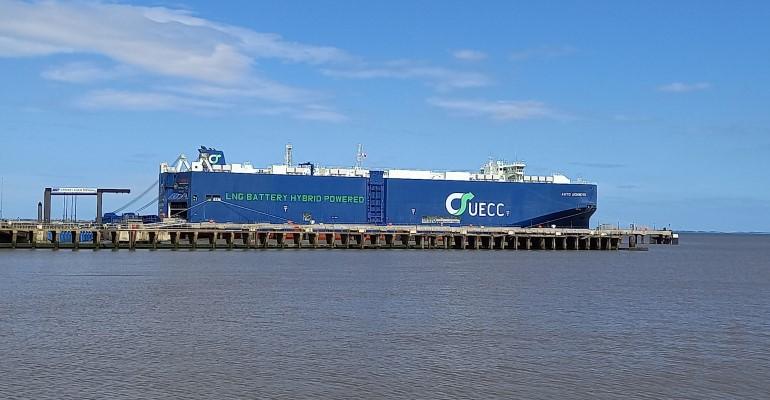 According to Clarkson Research alternative fuel features in a record 37% of newbuildings orders by number, and 60% by tonnage, year-to-date. Leading the way are orders for LNG dual-fuel numbering 298 or 38% of all tonnage ordered so far in 2022.

There are lower numbers of orders for methanol and battery-powered newbuilds, the latter on smaller vessels. Some 71 newbuilds ordered are described as ammonia-ready, some LNG dual-fuel vessels, such as those ordered by Pacific International Lines (PIL) are also ammonia-ready.

Looking at the current fleet DNV in its Maritime Forecast 2050, launched at SMM 2022 on Tuesday, said there 1,349 alternative fuelled vessels currently in operation – just 1.2% of the world fleet - with LNG fuelled accounting for 923 of these vessels. In gross tonnage terms the alternative fuelled vessels account for 5.5% of the global fleet in current operation, with LNG fuelled 5.39% of the fleet.

Of newbuildings on order there are 1,046 with alternative fuel – including 543 with LNG and 417 battery/hybrid. In gross tonnage terms alternative fuelled vessels account for 33.2% of the newbuild orderbook, with 30.2% of all orders placed by tonnage for LNG-fuelled ships. Methanol, which is attracting increasing interest, accounts for 1.45% in tonnage terms, and battery/hybrid just 0.02% of tonnage given the small size of vessels.

LNG dominates despite the fact in its current form it can only offer a reduction in carbon emissions, and controversy remains around methane slip. Just this week a new initiative – Methane Abatement in Maritime – was launched that includes backing Shell, Lloyd’s Register and MSC is seeking to develop solutions to address methane slip.

While LNG remains a fossil fuel bio-LNG provides a potential pathway to carbon neutral or zero carbon operations for vessels fitted with LNG propulsion. Promoting industrial scale production of bio-methane and e-methane is one of the focus areas of a $1.5bn special energies fund also launched this week by shipowner CMA CGM, one of the pioneers in using LNG as marine fuel on very large vessels.

In a modelling of 24 different scenarios for shipping’s energy mix DNV’s Maritime Forecast to 2050 sees bio-LNG featuring significantly in all scenarios.

“It is hard to identify clear winners among the many different carbon-neutral fuel options given the uncertainties on price and availability, but we can outline under what conditions each will proliferate. Bio-LNG, bio-MGO and bio-methanol, which are relatively energy-dense hydrocarbons, would be the preferred fuels, given sufficient availability of sustainable biomass."

Looking at bio-methanol, which would provide a zero-carbon option for methanol fuelled vessels, DNV said it was very sensitive to the cost of production compared to bio-MGO and bio-LNG.

The use of electro-fuels such as e-LNG, e-NH3 (ammonia), and e-methanol also require zero carbon electricity generation. “The availability of electrofuels depends firstly on the availability of renewable electricity to produce hydrogen by electrolysis. This requires the phasing out of fossil energy from power generation, which is still a long way off in most regions.”

While such fuels remain a long way off there is an urgent need to develop carbon neutral fuels at scale within the next few years. Some 2,000 ships are expected to be ordered annually between now and 2030.

“Carbon-neutral fuels must be made available for ships already within this decade, in decarbonization pathways assessed. By no later than 2030, 5% of the energy for shipping should come from carbon-neutral fuels. This will require substantial investments in both onboard technologies and onshore infrastructure,” said DNV Maritime CEO Knut Ørbeck-Nilssen.

The onboard technologies will require huge investments. DNV estimates investment ranging from $8bn to $28bn a year depending on which pathway the industry takes to achieve its goals. Much greater investments will be required in landside infrastructure and onshore supply chains estimated at between $30bn - $90bn.