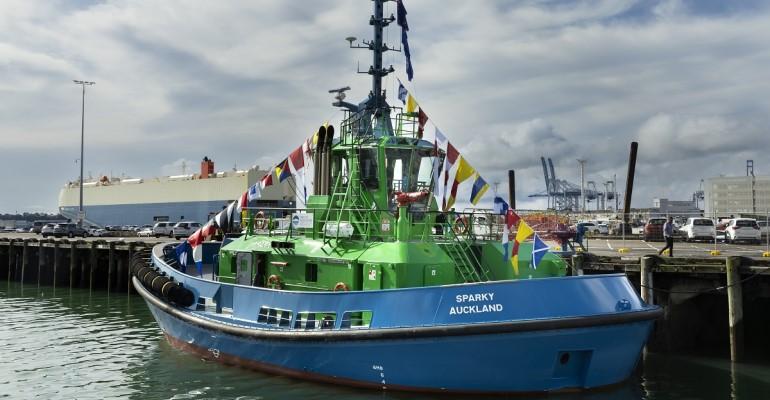 Damen’s first all-electric harbour tug has been named Sparky and received her Maori name, Tiaki, on delivery to the Ports of Auckland last week.

The RSD-E Tug 2513 has a bollard pull of 70 tonnes and is capable of assisting the largest vessels that call at the New Zealand port.

The electric tug is the result of six years of collaboration between the shipbuilding group and the port, which has set a target of zero emissions by 2040. The tug can undertake two or more assignments before a two-hour recharging process, Damen said.

The tug’s delivery comes as the ship/port interface is scrutinised more closely in the context of energy efficiency. The poor emissions performance of many ports and terminals can be relatively easily improved with the adoption of energy from greener sources, workboats that run on sustainable energy, and shore power for ships, experts say.

Allan D’Souza, Ports of Auckland’s general manager Marine and Multi Cargo Operations, commented: “It is wonderful to have Sparky here in Auckland and to be able to get aboard and put her through her paces. We held a blessing ceremony with local Māori iwi (tribe) Ngāti Whātua Ōrākei, as a final step before we officially start operations. As part of the blessing, Ngāti Whātua Ōrākei gave Sparky her Māori name, ‘Tiaki’, which means to care for people or place, in recognition of her role in reducing emissions and our port’s impact on the environment.”