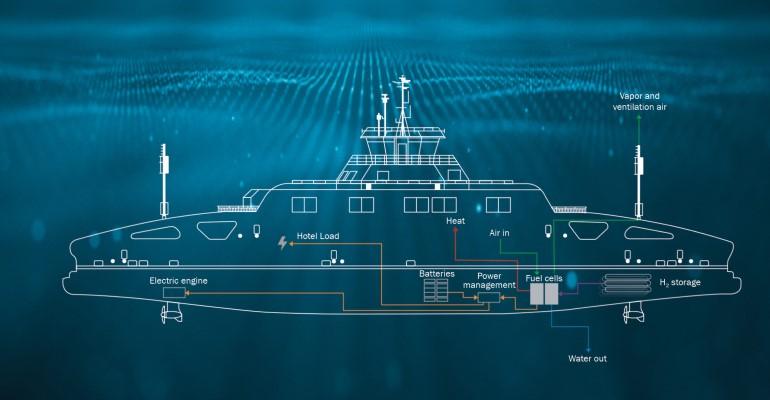 The scalable 200kW power module could provide a plug-and-play replacement for conventional diesel engines and could also become an integral component in ships’ hybrid power systems. It is suitable for a range of ship types as well as certain applications onshore, the Nasdaq-listed company said.

Mark Kammerer, EMEA Sales and Business Development Director, Off-road, told Seatrade that the first installations are likely to be on short-sea ships, notably ferries, but will be extended to wider sections of the world fleet in due course. The fuel cells, which are ‘scalable’ and can be installed in parallel, are also potentially suitable to provide electrical energy in ports – both for shore power connections and for the re-charging of batteries. The power density, he said, is comparable with diesel.

Related: Decarbonising shipping and the ‘need for speed’

FCwave has been developed at the company’s Marine Center of Excellence in Hobro, Denmark where manufacturing will also take place. The location has been chosen partly because Nordic countries generally are likely to among the first takers. One of the most promising markets is Norway, which has access to cheap hydrogen through hydropower, and also has some of the strictest zero-emission targets, notably in fjords and across the ferry network.

Commenting on the DNV approval, Søren Østergaard Hansen, General Manager, Marine, at Ballard Power Systems Europe A/S, said: “Type Approval from DNV is highly important in building market confidence in hydrogen fuel cells and validates that FCwave is designed, tested and prepared for installation. The module enables us to deliver the first deployment-ready fuel cell solution, capable of helping the marine sector take the next steps in implementing zero-emission operations.”

Ballard proton exchange membrane (PEM) fuels cells are already used in the electrification of other transport modes, including buses, trucks, trains, cars, and forklift trucks. Construction and earth-moving vehicles are also in the frame.