Decarbonisation – ‘Nobody can do it alone’ 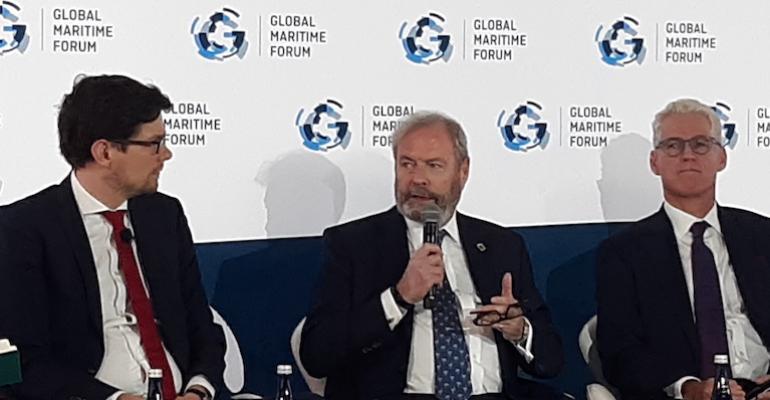 Michael Parker from Citi and Jeremy Nixon from ONE at GMF in New York
Collaboration has become the watchword when it comes to decarbonisation of shipping and as Michael Parker, Citibank’s Global Head of Shipping, Logistics and Offshore, put it at the recent Global Maritime Forum (GMF) Summit in New York, “Nobody can do it alone”.

At the meeting, Parker announced that the large German lender KFW had now signed on to the Poseidon Principles for Financial Institutions, “taking us up to 30 members, representing about 2/3 of all shipping finance.”

When asked about Citi’s path towards its leadership role in the Poseidon Principles, which he is the Chair of, he referred to the bank’s involvement in an earlier G20 climate initiative, and then adding: “I saw that as an opportunity…you could see what’s coming down the pike.”

Talking about the 2017 timeframe- just prior to commencing work on the Poseidon Principles, he said: “Already the energy portfolios of banks were under question, and you know what’s coming next.”

After saying “Nobody can do it alone,” a theme throughout the Plenary session of GMF, he pointed to the value of Poseidon Principles collaboration with the GMF, which had grown out of the predecessor- the Danish Maritime Forum, and stressed the importance of the International Maritime Organization (IMO) generally, and in particular, its role in providing actionable data through the DCS initiative.

Parker then offered a view that success of the Poseidon Principles is part of “finding a way to show the importance of this industry [shipping] to all the other industries.” He said that “we intend to execute, early next year” on a just-launched ambition statement committing to 1.5C on a well to wake basis.

Jeremy Nixon, CEO of container line ONE, when asked by moderator Nicholas Davis. from the University of Sydney, about challenges in achieving decarbonization from the perspective of a shipping line, provided multiple insights. After saying “It’s very important that we come together and gain consensus around the key pathway” Nixon cited successes at the World Shipping Council (WSC), of which he is co-chair, in identifying six key pathways.

He cited interest in decarbonisation from large customers including Ikea, also on the panel, and noted that the carriers need to bring down their “Scope 1 emissions”, which he pegged at just short of 100 million tonnes annually, working back to roughly 300 million tonnes of CO2 each year. “We need to rapidly bring that down,” he said.

Following an expression of progress in reducing shipping’s carbon intensity, down 40% since 2008, he said: “We have two key issues that need to be addressed…market based measures (MBM) and having the green fuels.” On MBM, he focused on differences between the cost of existing marine fuels versus the likely price tag of new fuels, telling the audience, “we cannot move to big scale [deploying new fuels] unless there is some leveling up in the energy costs”.

IMO politics were also mentioned, with Nixon saying that those delegations presently on the fence regarding MBM needed to be prodded into the “yes” camp when MBM was discussed at upcoming IMO meetings, starting with the MEPC 79 (December 2022). “We need to move that middle ground more into the majority, so that we can get something specific,” he suggested.

On new fuels, after stressing that the energy companies serving the shipping industry needs support from financiers and from governments, said: “We need to be certain that the green hydrogen, which will enable us to create the decarb fuels, is coming, and will allow us to move forward.”