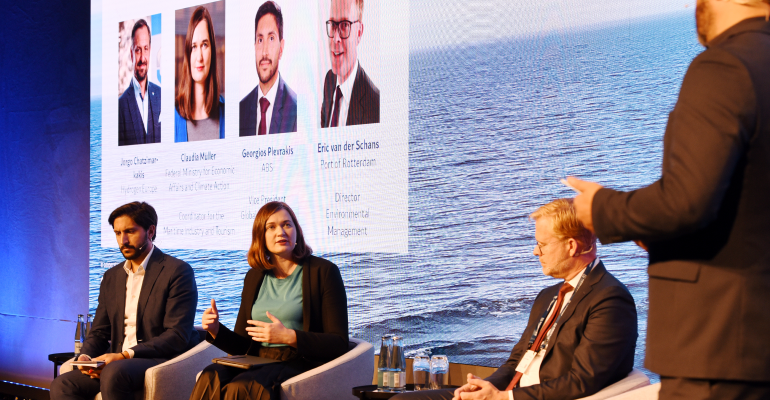 The decarbonisation of shipping will require more robust energy grids and efficient allocation of the right types of energy to the right consumers.

Speaking at the global maritime environmental congress (gmec) at SMM, Claudia Müller, co-ordinator for the Maritime Industry and Tourism at the Federal Ministry for Economic Affairs and Climate Action said Europe had made a mistake in relying too heavily on one unreliable partner for its energy needs.

The war in Ukraine has accelerated the transition to low carbon fuels, said Müller, and both building resilience and decarbonising involves diversifying energy sources. Focussing on Hydrogen-derived fuels, Müller said the maritime industry would be in competition for green hydrogen with other industrial sectors.

“We're using hydrogen already in the chemical industry, the steel producing energy industry is looking very much to hydrogen in order to replace coal. They have an extremely huge demand for hydrogen and in difference to shipping, they will not have many other options,” said Müller.

“The question is: where will we use which material the most efficiently? And therefore, we have to look at all the different options.”

ABS Vice President, Global Sustainability, Georgios Plevrakis said that value chains were central to solving the challenge of future fuels, and were the focus of the most recent edition of ABS’ Setting the Course to Low Carbon Shipping series.

“What we are exploring and researching is: where are the roadblocks and bottlenecks in these pathways?” said Plevrakis. “There are many pathways that have to be explored in the field of climate impact or the greenhouse gas footprint… the environmental aspects and sustainability issues, the availability of these things all has to be correlated with the availability of the critical resources that we need in order to support this type of scaling up.”

Beyond that process, safety and risk mitigation needs to be paramount as technologies mature, analysis is carried out and the best pathway for each segment of shipping is identified, said Plevrakis.

Eric van der Schans, Port of Rotterdam, Director of Environmental Management said he believes hydrogen will play an important role in fuels of the future. “We pledged to the European Commission that we are able to import about 4.6 million tonnes of hydrogen by 2030." By 2050 imports will reach 18 million tonnes.

"So hydrogen, will most likely play a major role in energy flowing around our globe in the next decades. And that makes it also a very viable option as hydrogen or hydrogen-derived fuels for the bunkering of the maritime industry,” said van der Schans.

Rotterdam is also working with partners to develop a common language and standards for future fuels so that ships will be able to confidently bunker fuels of an agreed standard around the world.

Van der Schans added that regulation was incredibly important for the adoption of new green technologies as it signposts the industry’s future.

“I think we in Rotterdam we established an onshore power strategy about two years ago. But we've seen the traction that it gained tremendously improved once it once the European Commission in their fit for 55 package, saying very clearly, they expect part of the maritime industry to connect to on shore power by 2030,” he said.

gmec was organised by SMM in partnership with Seatrade Maritime