Green hydrogen as an energy carrier in shipping decarbonisation 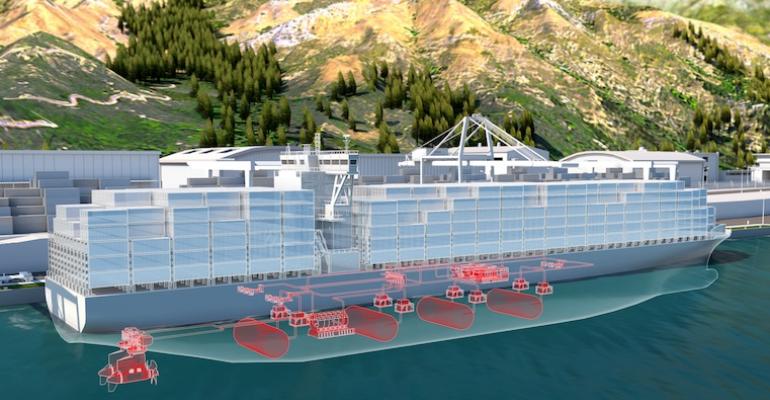 Concept illustration of a large vessel powered by fuel cells
Plans for several Middle East-based green hydrogen projects spur hopes that the region could become a pivotal player in the development of the global renewables industry.

The omens are good for the Middle East, as strength in renewables will translate into strength in green hydrogen. Last month, research carried out by Siemens identified a total of 46 potential green hydrogen projects in the Middle East and Africa, worth $92bn. These emissions-cutting schemes have seen the signing of MoUs on over $40bn-worth of projects in Egypt in the past year, and a $5bn green hydrogen project in Neom in Saudi Arabia expected to begin construction this year.

The shipping industry is keen to understand the implications of this new technology on transportation and vessel performance.

“We see quite a big movement in the use of hydrogen in heavy-duty transport in general. Fuel cells are now being adopted on buses, trucks and trains. Based on that, we also see that production volumes for this technology are rising—and costs are declining,” Jostein Bogen, VP Global Product Line Manager, electric solutions, at ABB, told Seatrade Maritime News.

“We believe that hydrogen will be an important energy carrier to decarbonise shipping.”

He said shipping line Maersk had recently contracted a number of methanol-run container vessels in South Korea. “According to Maersk, they plan to create methanol by first producing green hydrogen from renewables, and then generating methanol from bio-CO2. That's why we believe that hydrogen could be a very important driver towards an emissions-free industry.”

In order to produce green hydrogen at the lowest possible cost, there was a need to create production at scale, Bogen said. “All the barriers of transporting green hydrogen through pipelines or in vessels, as with LNG today, still exist. The research and development on the subject is substantial, and we should be able to overcome these technical barriers,” he said.

“Major renewables investments are taking place in the Middle East. Countries in the region have launched their own hydrogen strategies. Middle East solar energy production potential will have major implications for hydrogen storage.”

Hydrogen is not an energy source itself, Bogen explained, but an energy carrier and means of storage. Hydrogen is a good way to store solar energy, and here the Middle East has an advantage, he believes.

“The question of hydrogen is not only about bunkering, but also transport, either to a pipeline or using shipping. We are seeing developments in Middle East ports in that area. Countries like Saudi Arabia have announced massive investments in hydrogen. Dubai and Qatar are also investing in hydrogen and solar panels, which again are an enabler for green hydrogen production.”

Khaled Nagieb, CEO and president, Egypt Ports Development Group, said green hydrogen projects were gaining momentum in the Suez Canal Economic Zone (SCZone). “You can expect some of those projects to happen in other ports as well, but [they will be executed] predominantly in Sokhna Port,” he told Seatrade Maritime News.

“Nearly 20 MoUs have been signed in Egypt for the production of green ammonia, green hydrogen for export and bunkering vessels, green methanol or LNG. Whatever it is, Egypt's got all of it. It is a great position to be in, and there is availability of land around the SCZone.”

Last month, independent power company Globeleq, signed an MoU with four Egyptian government entities to create a green hydrogen facility at the SCZone. It is also a participant in the Benban solar farm in the south of Egypt, which is set to become the world’s largest such facility.

“Egypt's got great solar power and wind. Only a few countries have the best of both worlds. We have great, cheap, clean energy and good infrastructure today. It's been such a big change,” Nagieb said.