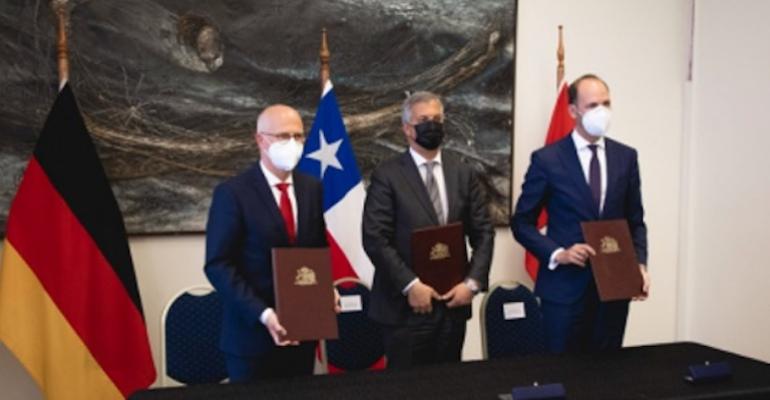 Chile's Ministry of Energy, the Ministry of Economy, and Innovation of the City-State of Hamburg, represented by its Mayor and Governor, and the Hamburg Port Authority have signed a Memorandum of Understanding (MoU) for the export of green hydrogen from Chile to Europe.

The green hydrogen produced in Chile in the coming years will be used in the first place to meet domestic demand and in a second stage for energy exports to other parts of the world, making the Port of Hamburg one of the centres for the supply of green hydrogen in Central and Western Europe.

The signing took place during a tour by German authorities in the region and was attended by the Undersecretary of Foreign Affairs, Ximena Fuentes, the Minister of Energy, Claudio Huepe and the Marketing Director of ProChile, Claudia Serrer.

"Our objective is to jointly create the necessary conditions for the early export/import of hydrogen and its derivative products to Hamburg and Central Europe and promote the rapid development of a self-sustainable hydrogen market in both regions," said Claudio Huepe, Minister of Energy of Chile.

The Mayor of Hamburg, Peter Tschenscher, said: "The MoU between the Government of Hamburg, the Hamburg Port Authority and the Chilean Ministry of Energy is a solid basis for a successful future co-operation. With its great potential to produce green hydrogen, Chile is on the verge of becoming an exporter of global magnitude.

“Hamburg is Europe's third largest port and offers excellent conditions for the import and distribution of energy carriers, such as hydrogen based on renewable energies. Together, Chile and Hamburg can create a strong energy partnership between South America and Europe".

Chile and Germany understand that green hydrogen transport will be one of the most appropriate ways to move towards the decarbonisation of hard-to-reduce sectors such as shipping, aviation, steel, amongst others.