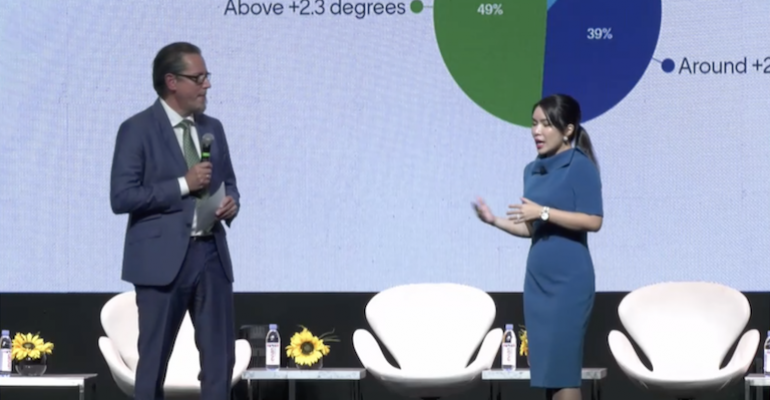 Action is needed now, not just long-term pledges, if the world is going to meet Paris Agreement targets on climate change, says DNV.

Having last week flagged a need to significantly accelerate the development of hydrogen in its Hydrogen Forecast 2050 earlier this month, the classification society reiterated the need to act immediately on climate change at a conference in Singapore on Thursday.

Speaking at the opening of the conference, Remi Eriksen, CEO of DNV stated: “So our latest outlook shows that the world is in for a rapid transition. And we're moving from an 80 - 20 split, that’s 80% fossil - 20% non-fossil [fuel], to a 50 - 50 split by 2050. That will not be fast enough to reach the goals and ambitions of the Paris Agreement. In fact, our forecast indicates we are heading for a global warming of 2.3 degrees compared to the temperature pre-industrial level.”

There is a need to shift the warming curve from 2.3 degrees to 1.5 degrees in the next 30 years, with the burden for this falling most on high income countries with the likes of Europe and the US needing to reach net zero by 2040 rather than 2050, Eriksen said.

While DNV sees energy demand peaking globally in 2035 this will be very different for fast growing regions such as Southeast Asia where the conference was taking place.

Related: MAN and DNV team up on hydrogen, digitalisation and decarbonisation

Brice Le Gallo, Regional Director for Energy Systems APAC at DNV, said: “Population is growing GDP is growing in that period of time, energy demand is going to double that means that during that period, some industries some countries will have to go below zero much before others and when we look here, we really hope that during that period, we need to focus on a much higher penetration of renewables to get things up to speed.”

For this to happen he stated: “We need to start now, and that is somehow a small disconnect between all the long-term pledges that have been taken, and probably the lack of immediate plans that need to start now.”

DNV sees a need to ramp up hydrogen production to three times current projected growth levels of 5% of global energy demand by 2050 to 15%. This would create a new intercontinental shipping trade for hydrogen which would be transported in the form of ammonia.

Eriksen explained, “The intercontinental trade of hydrogen will be almost exclusively in the form of ammonia. Ammonia is more convenient to transport for instance by ships and some 60% of energy related ammonia will be traded between regions by 2050. Ammonia will also increasingly be seen as a low carbon fuel of choice for many ships in the 2030s and beyond.”

Creating a network for hydrogen transport will not be an easy task though. Tan Wooi Leong, Senior Director (Energy & Industrial), Surbana Jurong, said: “There are now also a repertoire of technologies that can transport hydrogen, but some are mature, some are in early phases of development. At the end of the day, what works is if you can create a whole ecosystem to meet this entire supply generation, to transport, to final distribution work.”