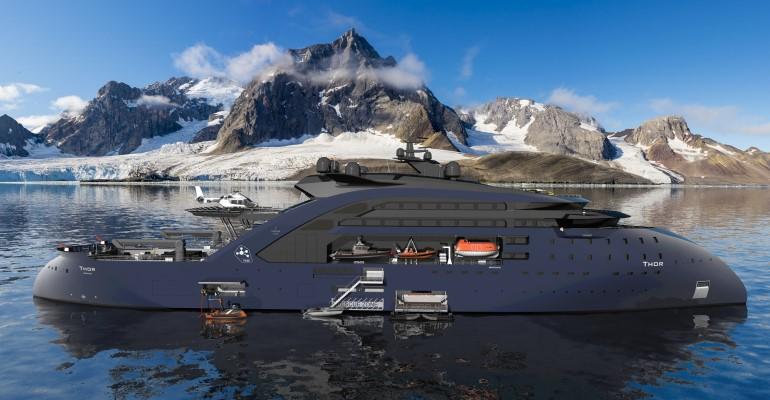 But the Norwegian Research Council has now allocated fresh funding for a maritime nuclear power research project at the Norwegian University of Science and Technology (NTNU).

Since the concept was launched in Miami, Ulstein has been inundated with enquiries on other possible shipping applications. And the company’s Thor developers are convinced that molten salt reactor (MSR) technology can be applied widely in shipping, possibly even proving to be the sector’s ‘silver bullet’ in terms of sustainable fuels.

In Miami, the Thor concept was released in a cruise context, with a 149 m-long vessel designed to generate clean electricity from a Thorium (MSR) providing power for expedition cruise ships. Now, though, there is potential to widen possible applications from cruise to many other shipping sectors.

The process works by dissolving Thorium, a naturally occurring metal with low radioactivity, in liquid salt. This creates a chain reaction that heats the salt and produces steam to drive a turbine that generates emissions-free electricity. Though the technology has been available for many years, it has not been actively developed in shipping because, until recently, any ‘nuclear’ option was off the table other than for naval craft or icebreakers in Russia.

However, Jan Emblemsvåg, a Professor at the NTNU and an expert in Thorium power generation, says the technology is perfectly safe and has ‘enormous potential’ for enabling clean shipping. The Professor, who has previously worked in shipping including positions at Rolls-Royce and shipbuilder Vard, commented on the technology at the time of Ulstein’s Thor launch earlier this year: “I see this as the most viable, and potentially the only credible, solution for a zero-emission fleet that can operate under commercial terms and cost levels,” he said.

Torill Muren is Lead Naval Architect at Ulstein Design & Solutions. “Thor essentially operates as a floating, mobile, multipurpose power station”, she explained, “one that never needs refuelling – instantly creating the ocean infrastructure needed to facilitate a new battery revolution. In Thor’s case, it would offer the charging capacity to satisfy the power needs to four expedition cruise ships … We see it as the missing piece of the puzzle when it comes to enabling safe, sustainable operations, anywhere on earth. As such, it really does have the capability to transform our industry.”

Ultstein’s Chief Designer, Øyvind G. Kamsvåg, sees amazing potential in the technology and compares it with the take-up of electric cars in Norway where 65% of all cars sold last year were electric, rising to 84% this January. “Nobody that needs a car wants to wreck the environment, but you must have the charging infrastructure in place to enable a meaningful switch to zero emissions transport; something that has been achieved with great success in Norway,” he said.

“Thor, or a concept like it, is the solution for establishing the same charging infrastructure at sea,” he continued. “In fact, that’s such a unique commercial opportunity. Why doesn’t somebody, a wealthy individual or a progressive company, buy a fleet of Thors and suddenly create a network of floating charging stations to power green shipping? What an amazing opportunity for a new, sustainable revenue stream! The possibilities of this are almost limitless.”