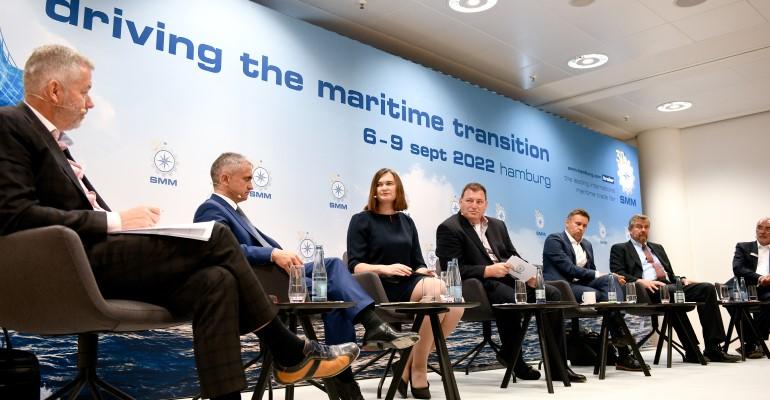 Vessel retrofits will be essential in reaching climate targets for the shipping industry over the coming decades.

Speaking at the opening press conference of SMM 2022, Claudia Müller, German Federal Government Co-ordinator for the Maritime Industry, said that retrofits had emerged as an important topic in the environmental debate since the industry last met in Hamburg in 2018.

Ships ordered today may well still be in service once the decarbonisation deadlines of 2050 come around, and yet the fleet on order now is dominated by fossil fuel engines. “We have to talk retrofit, it is the essential key for reaching climate targets”, said Müller.

Fellow panellists did not disagree, but each had their own priorities when it comes to the decarbonisation challenge and the coming discussions at SMM.

Dr. Uwe Lauber, CEO MAN Energy Solutions, said that the technology for zero carbon shipping is already available, and more options are on the way. LNG-fuelled engines are now tried-and-tested and offer a pathway to zero carbon via sythnethic or e-LNG, methanol engines have been proven in recent years and MAN ES expects ammonia-fuelled engines to be ready in 2024.

“We believe as an engine maker that these three fuel types will play a significant role, but It all depends on the availability of the fuel. So we are not the bottleneck, just to make to make it clear; the technology is there,” said Lauber.

“The question today is how fast can we ramp up the alternative fuels? At the end of the day the fuels should be co2 neutral, and that is the challenge,” he added.

Lars Robert Pedersen, Deputy Secretary General, BIMCO, believed the industry’s focus should be on ensuring sufficient build out of supply infrastructure for future fuels, and then making a business case for them.

“The transition is likely to take two decades or maybe even more. In this period, ships operating in the new environment on the new fuels will need to compete with the traditional fossil fuel ships. Can we actually make that equation balance so that it's good business? That's the big challenge,” said Pedersen.

Hapag-Lloyd Director Regulatory Affairs Fleet, Wolfram Guntermann, said the container line was investing heavily in retrofitting its vessels, including a programme to retrofit energy saving propellors to 90 vessels in the fleet, contributing to energy savings of between 10% and 30%.

“Furthermore, some vessels will be getting new noses with better hydrodynamics better. The older ships were designed when everybody was on continuous operation on the left lane of the autobahn at 24-25 knots some of these days are over for good,” said Guntermann.

The retrofit programme has been ongoing and will continue into the future, said Guntermann, including retrofitting vessels to operate on dual fuel LNG or alternative fuels. “We cannot afford to spend another two decades on this infamous chicken and egg discussion,” he added.

Laying out the market background for the transition to green fuels, Steve Gordon, Managing Director at Clarksons Research GmbH said that the market was in a much better position than when SMM last convened in 2018.

“The market’s in a much better position. There is a but, as you would always expect in shipping. Shipping is a cyclical business and is managing great uncertainty in the world economy; that's one of the shootings biggest challenges,” said Gordon.

The container and dry bulk markets which propelled industry fortunes to record highs in recent years have began to soften in recent months, said Gordon, with a more positive outlook for LNG and tanker shipping.

“It's a challenging story. Lots of cycles and issues to deal with,” said Gordon.