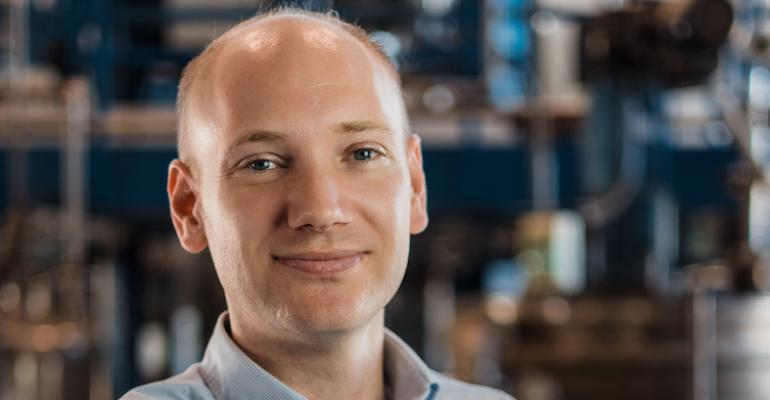 Nicholas Ball, CEO of XFuel
There is growing interest in marine biofuels but full-scale commercialisation faces issues around cost and compatibility with standards, however XFuel claims to have the answers.

XFuel is developing modular, scaleable, refineries for a second-generation biofuel that is compatible with existing ISO marine fossil fuel specifications and the company says is considerably lower cost than existing biofuels.

XFuel uses a patented process to convert biomass waste into drop-in biofuels and currently has a demonstration plant in Spain with an annual capacity of around 1m litres, and is now gearing up for larger projects around the world which would be capable of supplying the volumes required by the marine industry.

Explaining the process it uses Nicholas Ball, CEO of XFuel, tells Seatrade Maritime News: “The way we go about this is as a single conversion step, it is very efficient in terms of the energy we use to produce our fuels. And we use temperatures and pressures that are very low, comparatively to the industry, which means our equipment is very low cost. So, our capex requirements are also very low.”

The result, XFuel say, is they can produce high quality biofuels for marine and other industries at a lower cost. Ball is coy though when it comes to how much this in terms of price of XFuel’s marine biofuels compared to conventional ones currently in the market. He did though describe it as “compelling” although also dependent on the project and feedstock availability.

Related: DHL and Hapag-Lloyd to use advanced biofuels

The resulting fuel, unlike other drop-in biofuels, is compatible with the ISO 8217 (2017) standard for fossil fuels. The lack of an international standard for biofuels is seen as one of their barriers to large scale adoption. “We actually are technically the same as what you would find in fossil fuel in terms of the specs and meeting those specs,” Ball says.

For feedstock XFuel uses primarily wood waste from the construction industry, furniture waste, as well as forestry and agricultural waste. Ball says they are working with the likes of feedstock aggregators and waste management companies. “We focus on all different types and that's what makes it so compelling is that really, we have plenty available for us from the waste streams,” he says.

A phasing out of waste incineration would provide further feedstock sources.

While the company has done analysis and trials of its biofuel with various engine types it is yet to carry out a full vessel test, which would require 20 – 30 tonnes of fuel. Ball sees partners for vessel tests as the next stage to commercialisation of its product.

In terms of what lies ahead for XFuel expansion and build out of plants in multiple locations is the plan but Ball is unwilling to give details. “We are essentially looking to roll out a number of projects across different countries, and specifically right now for the marine industry,” he says.

He adds that their first commercial project is coming soon, with another to be announced in Europe soon. With a modular system XFuel believes it will be able to scale up quickly and it will be a case of watching this space to see how and when the company moves from a demonstration project to a commercially viable product.