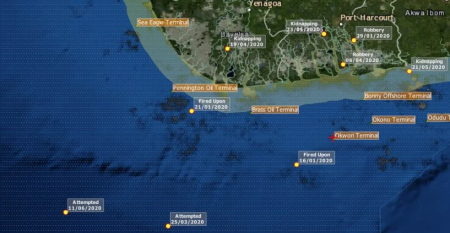 Crew kidnap warning for ships in Southern Philippines/East Malaysia
Jul 02, 2020
A warning issued in May over members of the Abu Sayyaf group looking to kidnap crew from ships in waters in the...

Pirates kidnap seven crew from MSC boxship off Gabon
Mar 23, 2020
Seven crew members onboard container vessel MSC Talia F have been kidnapped by pirates in the Gulf of Guinea, off the coast of Libreville, Gabon.

Eight kidnapped crew from the Happy Lady freed by pirates
Jan 23, 2020
The Hellenic Coast Guard has announced eight crew members of the Greek-flagged tanker Happy Lady abducted by pirates in an attack near the coast of Cameroon were released on 22 January after three weeks in captivity

IMB warns on ‘unprecedented rise’ in pirate kidnappings in Gulf of Guinea
Jan 14, 2020
The Gulf of Guinea saw a more than 50% increase in kidnappings by pirates in 2019 with a sharp rise in the fourth quarter, according to the annual report of the International Maritime Bureau (IMB).