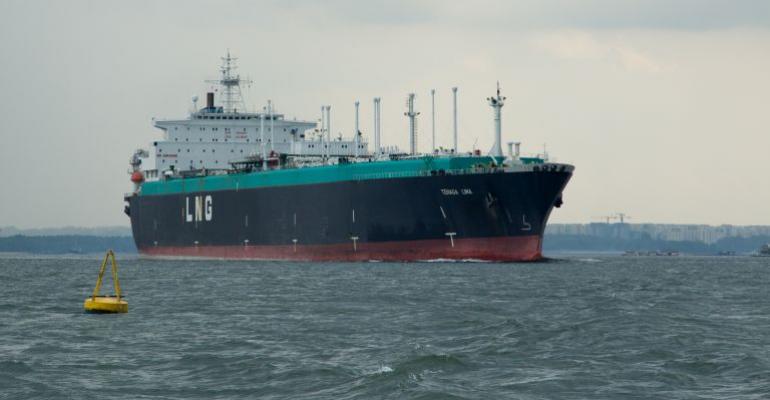 The IMO’s carbon intensity regulations, specifically the carbon intensity indicator (CII) in place since 1 January, are likely to have a dramatic impact on LNG fleet supply which could lead to ‘stranded’ assets later this decade.

The warning comes from Lloyd’s Register’s gas sector guru, Panos Mitrou. In an opinion piece in the latest issue of the classification society’s Horizons magazine, Mitrou warns that a large number of today’s LNG carriers are likely to fall into categories ‘D’ or ‘E’ when their CII emission profiles are analysed. And, as the CII framework tightens over the second half of the decade and methane emissions are included in CII assessments, many vessels could become unemployable, the expert suggests.

Vessels most at risk in the 650-ship deepsea fleet are the 240 LNG carriers powered by steam turbines. Although they do not suffer from methane slip, they are heavy consumers of fuel and do not have boil-off management systems. Their day rates are substantially lower than LNG tankers equipped with four-stroke dual-fuel diesel electric (DFDE) engines (about 190 ships) and the 215-odd latest generation low- and high-pressure two-stroke vessels.

The DFDE ships are also at risk because of high methane slip. Mitrou estimates that some of these engines emit up to 15 times more methane than later engine designs.

Since Russia’s invasion of Ukraine and dramatic reductions in cross-Baltic gas by pipeline, seaborne LNG into Europe has become a top priority. European imports from the US, for example, have climbed sharply. This, in turn, has boosted the LNG orderbook to an all-time record of about 240 ships and the relatively small number of specialist LNG-capable builders are practically full until 2027.

However, Mitrou warns that rapid price escalation – ships that were costing about $180m are now priced at about $250m – means that owners are opting for basic specifications with few extras such as air lubrication, shaft generators or waste heat recovery systems. So these vessels are unlikely to fare well in CII assessments.

“The most basic LNG carrier designs are likely to be the least attractive from a charterer’s view point later in the decade because, in carbon efficiency terms, they will have the lower CII grades,” Mitrou warns. “If there are to be ‘stranded’ assets, these will be among the first.”

The LR experts supports his argument by citing LNG containment systems, one of the most important factors in ship efficiency. Although LR approved a new advanced series of membrane containment systems last year, the GTT No96 Super +, it is only in recent weeks that builders/owners have started to offer/ask for them, he says. Until recently, only one Japanese owner had specified the new containment system.

Listen to a recent podcast on the CII regulation

Retrofits to existing ships could extend their lives, Mitrou believes, citing LR’s Approval in Principle awarded to Spanish LNG shipowner, Empresa Naviera Elcano, for its patented steam-to-hybrid conversion arrangement for steam turbine ships. Integration of a four-stroke engine in parallel with the steam turbine enables a hybrid propulsion arrangement. Other efficiency gains include the retrofitting of a reliquefaction plant, driven by a dual-fuel generator, to manage boil-off gas.

Such conversions could cost as much as 10% of the cost of a new ship today – around $25m. However, Mitrou estimates that retrofits like this could generate efficiency gains of 20-30%, enabling far more favourable CII assessments, and life extensions of up to ten years for steam turbine vessels. They would also facilitate a smoother fleet renewal schedule and avoid the risk of stranded assets later this decade.