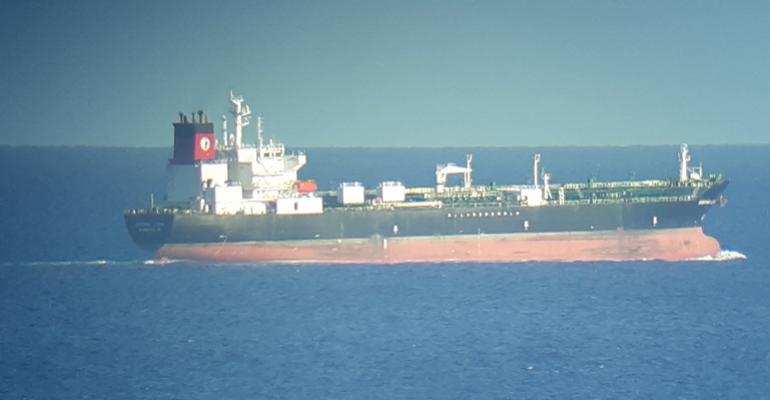 Jones Act tanker Sunshine State off Miami
As the shutdown of the Colonial Pipeline continues into its fifth day the possibility of a Jones Act waiver for vessels carrying products up the US East Coast is starting to be looked at by the authorities.

So far the impact of the shutdown of the pipeline, which starts near Houston, Texas and snakes upwards to Linden, New Jersey- just outside New York City, has been most notable for long lines for, and short supplies of gasoline in the southeastern United States.

Reports indicate that the outage was taken pro-actively by the management of the line- which transports gasoline, jet fuel and some diesel, from the refineries of Texas to consuming regions in the Southeast, the mid-Atlantic and then up to New York, following a malicious hack of its corporate computer systems.

Related: Scorpio Tankers and where next for the products market?

Pipeline management has announced that throughput would resume in stages, after ascertaining that “malware” was not present in the operational controls of the line. The artery was expected to be back in operation later this week - duration of the outage being seven or eight days.

On the shipping front, there were initial reports of additional international product tankers loading at European refineries being ordered to US Atlantic ports (a 10 -12 day voyage). The Northeastern US routinely takes refined products from northern European origins.  Observers were closely watching developments as the Biden administration took the early steps of what could be a waiver of the Jones Act- the rules which reserves coastwise US crude and product trades for vessels built/owned/crewed by US citizens.

Waivers are granted infrequently and only for national defense considerations, the last being during the 2017 Hurricane season, when Jones Act qualified vessels sheltered along the Atlantic coast putting them out of position to load cargoes from refineries located in Texas and Louisiana.

The Department of Transportation (USDOT) will evaluate the supply of qualified tonnage and advise the Department of Homeland Security (DHS), the ultimate decider on granting a waiver, which would be valid for a limited time period with specific geographical parameters.

Mid-day Tuesday, 11 May, the USDOT announced that it was taking the first steps- that is, evaluating the supply of suitable Jones Act ships and barges that could handle coastwise marine transport of refined products that might otherwise be transported by pipeline.

One barometer suggesting that the marketplace sees a quick resumption of pipeline throughput has been the closing price of Scorpio Tankers. On 7 May, the Friday before Colonial Pipeline’s troubles were known, it closed at $19.63 per share.  On 10 May, with the pipeline hack at the top of the morning news, Scorpio Tankers traded as high as $21.05 per share early on, before backing off to close at $19.96 in the face of announcements of gradual resumptions of flows during the day. By Tuesday, May 11, the shares closed at $19.46- just about the same level pre Colonial kerfuffle.