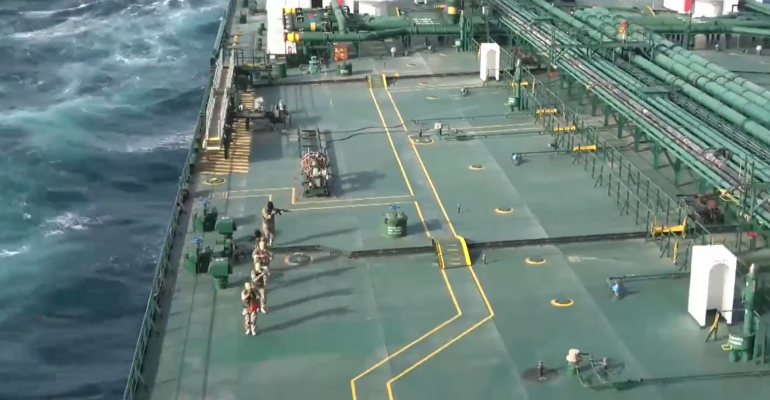 IRGC forces seize Greek tanker Prudent Warrior in the Persian Gulf in a video posted on the Twitter account of Ayatollah Ali Khamenei on June 4
Iran's supreme leader has confirmed that Iranian Revolutionary Guards Corps (IRGC) forces seized two Greek oil tankers in retaliation for the U.S. confiscation of the Iranian crude aboard a tanker detained off Greece over a month ago, saying Iran’s actions did not amount to theft.

Ayatollah Ali Khamenei made the remarks in a speech on Saturday to commemorate the 33rd anniversary of the death of Ayatollah Rohollah Khomeini, the instigator of the 1979 revolution that led to the creation of the Islamic Republic.

“Some time ago, the Greek government stole some of our country’s oil due to an order from the Americans,” Khamenei was quoted as saying on his personal website.

Related: Greece and Iran at loggerheads over tanker seizures

“But when the self-sacrificing, valiant soldiers of the Islamic Republic confiscated the enemy’s ship [sic] carrying oil, they accused Iran of theft through their extensive propaganda machines. But it was them who had stolen our oil. Taking back something that had been stolen is not an act of theft.”

Iran’s Ports and Maritime Organization (PMO) said in a statement yesterday that the crew of the two seized Greek tankers were in good physical and mental health and that phone calls with their families had been arranged and facilitated, according to state news agency IRNA.

Two Greek tankers were seized by the IRGC in the Persian Gulf on May 27, in what Iran said was retaliation for the detention of a tanker carrying Iranian oil off Greece in April, with a view to U.S. appropriation of the cargo. The Greek Ministry of Foreign Affairs issued a strongly-worded protest at Iran’s actions.

IRNA said Imam Khomeini, who steered the popular uprising in Iran culminating in the fall of the former regime of Shah, died on June 3, 1989.

TankerTrackers.com, in an update issued on Saturday, said: “DELTA POSEIDON has now been relocated from Larak Island to a spot off the northeast coast of Qeshm Island, so the two tankers are now separated by merely a nautical mile. We expect them to remain here for the duration of their captivity by the IRGC.”