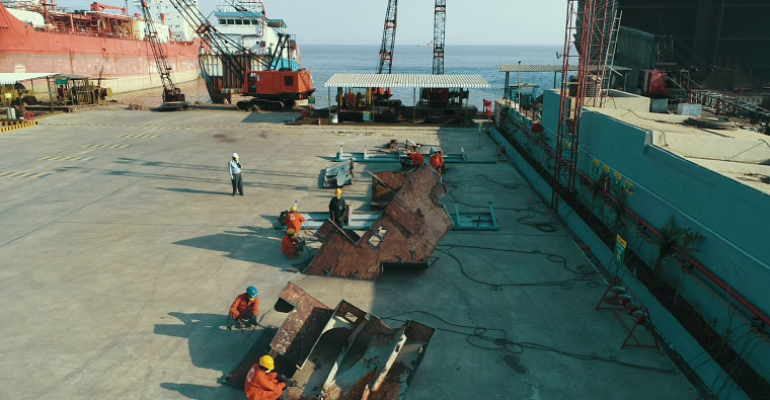 Leela Ship Recycling yard
Firm demolition prices have stayed in place over the first half of March, with steel plate prices in Bangladesh reaching their highest prices so far this year, with rising levels of recycling predicted this year.

The Indian market is firm too, according the a weekly report from Dubai-based GMS, the world’s largest cash buyer of end-of-life ships, although Pakistan has eased slightly following transactions including a very large ore carrier and a panamax bulker completed in the high $400s.

Indicative prices in Bangladesh were around $480 per light displacement ton for container ships in Bangladesh, with $10 less for tankers, and a further ten for bulk carriers. Indian prices were typically $20 below those prevailing in Bangladesh but both of these markets were improving, according to GMS. Recyclers in Pakistan were paying midway between yards in Bangladesh and India but prices there were drifting.

GMS expects continuing price volatility at recycling yards in the subcontinent market over the months ahead and warns sellers to tread carefully. “Even if units are sold immediately onwards at top prices,” GMS said, “until a letter of credit is released and the vessel is beached, there is no firm assurance on the potential performance of the cash / end buyer as we have seen all too often in the past.”

Meanwhile, several shipbrokers have predicted rising levels of recycling this year, particularly in the tanker sector. Simpson Spence Young noted relatively low recycling tanker sales in a recent report, but put this down in part to older vessels deployed on storage contracts.

These contracts are coming to an end now and older vessels may well require dockings, upgrades and surveys in the near future. According to SSY data, there are about 65 tankers in the principal size categories that are due for fourth special surveys this year.

Separately, Barry Rogliano Salles has suggested that more than 90 tankers could head for demolition this year, identifying not only surveys but regulatory requirements including ballast water installations.

Meanwhile, owners will also be thinking about IMO requirements relating to the carbon profile of existing ships through the energy efficiency existing ship index (EEXI) and the carbon intensity indicator (CII).