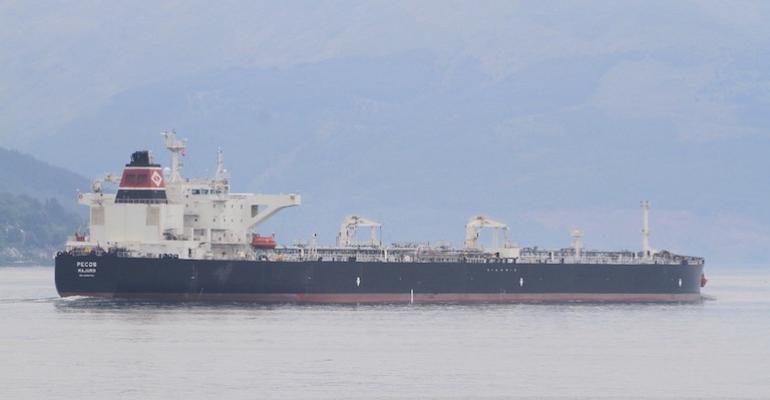 Image of tanker Pecos, now re-named Seaways Pecos
As the cliché goes, “the tanker sector is on fire.” Charter hires have reached stratospheric levels on the back of longer voyages for crude oil and for refined products, as well as small and large gas carriers.

The team at Deutsche Bank - Amit Mehrotra and Charles Robertson, who has recently joined - put it nicely: “Looking ahead, we expect continued strength in the tanker segment into next year, especially in light of upcoming EU sanctions against Russian crude and refined oil products imports. We believe minimal fleet supply growth coupled with expanding tonne-mile demand for tankers will result in stronger rates for coming quarters.”

An important index of tanker health (or not) is the Baltic Dirty Tanker Index (BTDI), a composite of hires), which has surged from just under 1,500 points to over 1,800 points during October. Researchers at tanker broker Poten have pegged period hires for economical VLCCs at $47,500 per day for one year (out to end 2023), and $39,000 per day (out to end 2024) for two year periods. Spot hires for VLCC’s in the BTDI, for AG to Far East were estimated to be north of $70K per day

The listed equities have responded in kind. International Seaways (NYSE: INSW), which the Deutsche Bank analysts had placed a target of $40 per share on around 10 October when they began coverage, has been a standout. With INSW having now reached above this target in less than three weeks after starting to follow it, the analysts have now moved the target up to $50 per share, based on cash flow estimates for 2023- 2024 being revised upwards. Each new pricing pinnacle represents an all-time-high for the tanker owner, with its previous highs set in early 2020 at around $30 per share.

Importantly, the Mehrotra/ Robertson duo say: “We believe INSW shares are now trading above net asset value (NAV).” Other owners have also noted the owner’s strength. Besides a prescient investment in INSW by Frontline (NYSE: FRO) in late April, which has now nearly doubled in value, investors tied to insiders Ofer and Navig8 both took stakes during October.

Related: Tankers ‘set up for a very good bull run’

The potential for dramatic increases in demand for handling Russian oil export oil movements is bolstering tanker optimism as origins and destinations begin a big pivot in the wake of sanctions, and, possibly, price caps on oil moving out of Russia.

One extreme trade-rearrangement boosting ton miles, cited by one news service contemplated that oil from eastern Russia was being supplanted, in the case of several cargoes recently fixed hauling Brazilian crude into China. Once the sanctions begin, observers expect that what’s euphemistically known as the fleet of “shadow tankers” or “dark tankers” will haul at least a portion, but not all, of the Russian crude to buyers, complemented by owners staying out of the European Union trades.

Analysts at shipbroker Braemar who looked at projected export volumes against available Russian and Russian-trading tankers still came up with a deficit. Their calculations suggest a “shortfall” of 110 tankers (mainly Aframaxes and Suezmaxes) needed to haul Russian crude if volumes remain around 3.5m barrels per day. Brokers Gibson, while not putting a number on needed vessels echoed a similar notion of a shortage, and, said that if the Russian trading fleet is undersupplied, “which would drive increased S & P activity and potential support secondhand values even higher.”

While the optimism is raging now savvy players are taking money off the table. Besides tanker owners entering into period charters to lock in the highs, at least one large INSW shareholder has been cashing out. Regulatory filings show that entities linked to Craig Stevenson, a Director of INSW, who headed up Diamond-S, which was merged into INSW last year, had sold a large block of owned shares though still maintaining a substantial holding. Stevenson was heading up the old OMI Corp, which sold its fleet for $2.2bn, divided between Teekay and Torm, in 2007, at the height of a previous tanker boom.