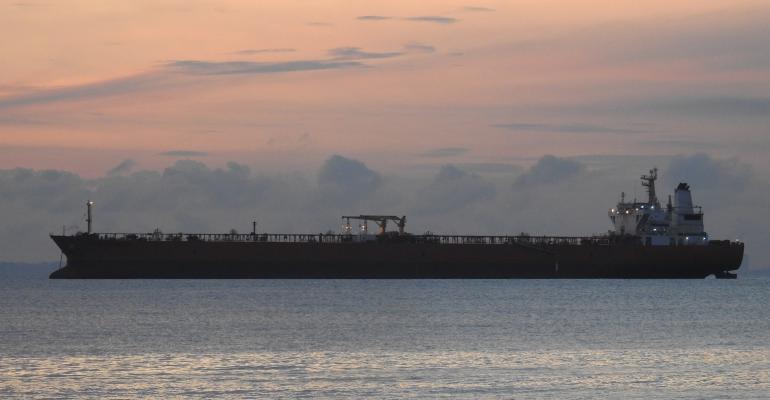 In its weekly market report, London-based shipbroker, Gibson, noted that the failure so far to sanction Russian energy exports does not mean that tanker trade will not be impacted. Many large companies, particularly those which are public, will not want to be seen supporting the Russian economy, the firm said, noting however that freight premiums and crude oil discounts will ensure that trade continues. Urals crude was trading at an $11 discount to dated Brent, Gibson noted.

Brokers Poten & Partners noted that shipowners were reluctant to charter vessels to buyers of Russian crude. Although rates spiked from the Baltic and the Black Sea there were also very few transactions done.

At least three commercial vessels – two bulkers and a bunker tanker - have been hit in the conflict, and the Ukraine government reports two further vessels taken by the Russian Navy.

“Until hostilities are reduced, many shipowners will likely avoid this area, through which Russia exported on average 1.7m barrels per day of crude oil in 2021. On the other hand, high enough tanker rates and discounted prices for Russian crude will create a powerful motivation for some brave charterer and owner to take a chance and pick up a cargo,” Poten commented.

China is the largest buyer of Russian crude exported by pipeline and ship, while Europe as a whole is the largest buyer of Russian crude exports overall. Refiners across the European continent are now likely to increase liftings from a range of other sources, including the Americas, Mediterranean, North Sea, West Africa, and Middle East, Gibson predicted. This is likely to boost tonne-mile demand over the short- to medium-term and could help to lift tanker earnings from a prolonged period of rock-bottom rates.

The outcome of OPEC’s 2 March meeting will be anxiously awaited. Cartel members will certainly come under pressure from Western nations to raise output, but Russia’s seat at the OPEC+ table complicates matters. Gibson suggested that IEA members may consider releasing government-controlled stocks to ease prices, although this would be unlikely to have a major impact.

Meanwhile, although Russia’s oil and gas exports have not been included in sanctions, news came on Sunday that some Russian banks are to be excluded within the next few days from Swift, the Society for Worldwide Interbank Financial Telecommunication, a global inter-bank communications system underpinning international bank transfers. According to Ursula von der Leyen, president of the European Commission, the measures will prevent Russia from “using its war chest”.

Anti-Russian sentiment was hardening by the hour, demonstrated by a dramatic change in strategy by  Germany. Coming on Saturday, a few hours before the Swift announcement, Germany pledged to provide rocket-propelled grenades, armoured personnel carriers, and fuel to Ukraine, reversing a previously declared policy of not providing military assistance.

Olaf Scholz, German Chancellor, declared: “The Russian invasion of Ukraine marks a turning point. It threatens our entire post-war order. In this situation, it is our duty to do our utmost to support Ukraine in defending itself against Vladimir Putin’s invading army. Germany stands closely by Ukraine’s side.”

“The Russian invasion of Ukraine marks a turning point,” German Chancellor Olaf Scholz said in a statement. “It threatens our entire post-war order. In this situation, it is our duty to do our utmost to support Ukraine in defending itself against Vladimir Putin’s invading army. Germany stands closely by Ukraine’s side.”