‘Unprecedented levels’ of floating storage, but where next for the tanker market? 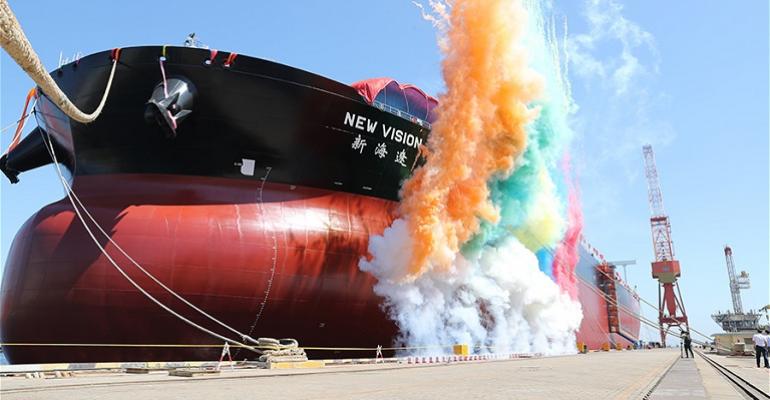 Floating storage has moved to “unprecedented levels” but with oil output cutbacks agreed how long can the market rally last?

On a BTIG webinar Charlie Chasty, a researcher from shipbrokers Affinity, presented statistics showing the destruction in oil products demand occurring alongside early March’s sharp increase in supply. In his slides, he explained that “floating storage has moved to unprecedented levels” for both dirty -  129.8m barrels of crude and 60.7m barrels of products and clean - 36.4m barrels - tankers, with “supportive storage economics driving tanker time charter activity”.

The huge discounts in the spot prices of oil sketch out a steeper “forward curve”- with the effect of raising the vessel hires that could be absorbed in a profitable oil storage trade. Based on mid-April Brent pricing, Chasty’s calculations showed that six-month storage trades could be profitable with VLCC’s booked at levels up to $91,000 per day and $53,000 per day for a one-year storage contract. For six-month charters, he said that $80,000 per day is “closer to average” for deals being done. Affinity’s team suggested that big traders (Glencore, Vitol, et al), but also Shell, were big participants in the storage trades.

The next few weeks could bring some visibility on at least one near-term variable the compliance of oil exporters in actually paring back outputs to levels just agreed in the 9.7m barrel cutback deal.

Affinity VLCC specialist Dan Cater, said that “So far, we have not seen decreases…” in production. In answering a question by Greg Lewis, BTIG’s shipping analyst, about compliance with targeted cuts, he said: “It depends who you are talking about….at the moment, the Russian [VLCC chartering] program for May is extremely big…because of the time lag, we won’t be able to tell [about reduced volumes] until we hit June laycans.”

Speaking about Saudi Arabia, he said, “We should get some feeling within a week on whether they’ve implemented the cut…” noting that spot fixtures would be reduced (or eliminated) with a cutback.

As for changes in market practices, albeit not necessarily permanent,  occasioned by the new market dynamics, Affinity  pointed to fixing activity being brought more forward than previous. In describing the West Africa market, Cater described a situation where fixing of suezmaxes - somewhat interchangeable with VLCCs-  were seeing a fixing programme more in line with that of the VLCCs, maybe three weeks out, instead of the more typical one month lead-time.

Dan Hockey, from Affinity discussing the product market, alluded to charterers being concerned about delays and vessels tied up in opportunistic moves, and moving their fixing upward- rather than waiting for a more typical ballast leg. He pointed to dormant oil storage facilities, for example in Scandinavia, now being redeployed, and product tankers shifting to longer routings to facilitate Middle East loadings to participate in a strong product tanker market in the East.

But the team noted that a major inflection point on the horizon- landside storage filling up, including for products.  Hockey said: “Over the next two to three weeks- we’ll see more changes…as people struggle more and more” with logistics of where to place products.

Cater also said that “if we are bearish in figures for GDP growth and oil prices generally, that’s actually good [for tanker hires] because these ships will need to be tied in for longer periods.” He added: “Until we’ve seen some real changes on the production side, there’s no real reason to call it off,” referring to the ongoing surge in tanker fixing driven by storage.