Digitalisation not a magic wand, companies must identify pain points 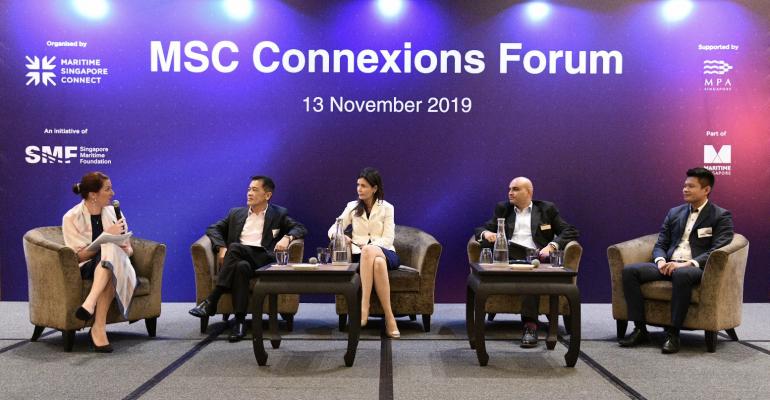 That was the message from panellists at the MSC Connexions Forum 2019 in Singapore on Wednesday, who shared their challenges in undertaking digitalistion.

Tommy Phun, director (business development) for Eng Hup Shipping, which he described as a traditional Singapore SME, said that in face of a weakening economic climate and low charter rates the company had embarked on digitalisation as a pathway to long term growth and sustainable profitability. Phun shared how the company decided to implement a grand vision of digitalisation, however, would find it had bitten off more than it could chew.

“When we started this whole journey two years ago what we envisaged was to have a giant interactive console where at on glance you see all 70 vessels. When you click on the vessel you see the stats, crew competencies, you control the vessels like you do in a command and conquer game. But unfortunately it didn’t work.”

However, despite this setback Eng Hup has preserved with digitalisation, changing its approach and is now reaping the rewards. “We went after the low hanging fruit, we went after small things one at a time and when we did that started to see the real tangible benefits of digitalisation.”

Phun said that as people in the company start to see the results of digitalisation they bought in to process. “You need to have a realistic expectation of what digitalisation and transformation can bring, it is not a magic wand, it is long process.

The need for practical projects that bring tangible benefits was also stressed by Punit Oza, head of systems, processes & competencies for Torvald Klaveness. He said that most companies view technology as an end in itself. “But it is not the end in itself, it actually has to solve some pain point that makes some kind of sense.”

One such case for Klaveness was were staff in operations and chartering were spending a lot of time analysing budgeted voyages against actual performance and deviations in a manual, paper intensive process. This has been streamlined with a simple dashboard, which can be used across departments enabling collaboration.

The MSC Connexions Forum was organised by the Maritime Singapore Connect Office, a unit under the Singapore Maritime Foundation.