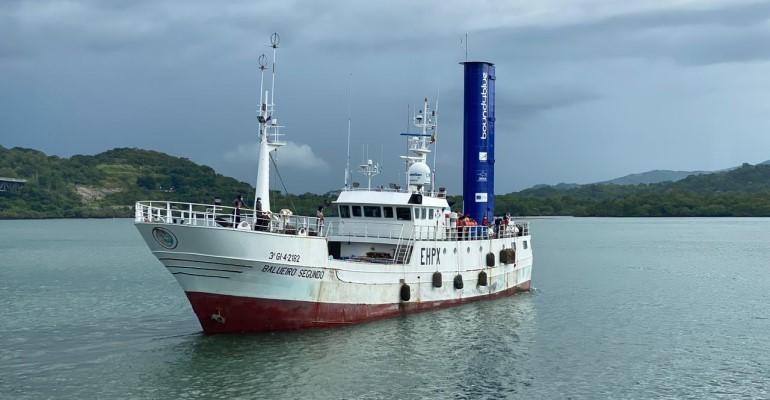 Balueiro Segundo with its eSAIL installed
Bound4blue has announced the successful installation of a rigid sail system onboard a fishing vessel, opening up smaller vessel segments to the carbon-cutting technology.

The company’s eSAIL system has been installed along with a performance monitoring system from Kyma on Balueiro Segundo, a ship belonging to fishing longliner specialist Organización de Palangreros de A Guarda (ORPAGU). The ship is set to start sailing with the technology soon for sea trials in the Pacific Ocean.

The system comprises a 12-metre rigid sail, control system, and a monitoring system to monitoring and validating fuel savings.

Stability tests have been carried out on the 593 gt, 41-metre vessel, which will be the first fishing vessel in the world to have auxiliary wind propulsion through a rigid sail system.

The project was part-funded by the European Union through its Aspiring Wingsails framework; the EU co-funded the design and commission of bound4blue technology and the Kyma monitoring system, and ORPAGU received institutional support from the European and Maritime Fisheries Fund and the Spanish Ministry of Agriculture, Fisheries and Food.

José Miguel Bermúdez, CEO, bound4blue said: “Having active collaboration with shipowners and institutions as catalysts for innovation such as, in this case with ORPAGU and the European Union through their support in the Aspiring Wingsails project, has been absolutely key to making this happen.”