Use of fluid mechanics improves efficiency of wind-assisted ships 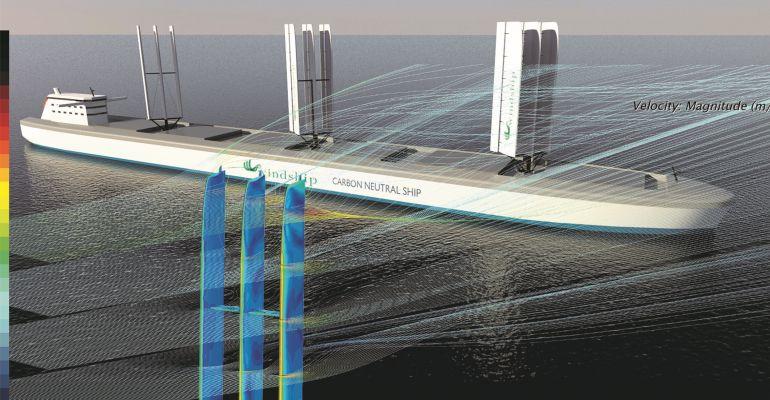 UK-based Cape Horn Engineering has reported a two-digit percentage improvement in the aerodynamic performance of a vessel’s solid wing assembly via the use of Computational Fluid Dynamic (CFD) programme.

The use of Wind Propulsion Technology (WPT) such as rigid wings, sails, kites, Magnus rotors on some vessels like bulk carriers and tankers have the potential of fuel savings and emission reductions around 10-30%.

Cape Horn Engineering said it is supporting one of its clients, Windship Technology, on a solid wing power concept that is being developed by a consortium of key players in the global shipping industry.

“We are extremely proud to be part of the team led by Windship Technology for this exciting project, running a CFD programme to further improve the design of the solid wings,” said Rodrigo Azcueta, managing director of Cape Horn Engineering.

“One of the key focuses of our project is to provide a clearer, unbiased and more detailed analysis of the new technologies available. The analytical evidence provided will give businesses a clearer understanding of the potential savings that can be realised with the implementation of the green propulsion systems. Without significant mitigating action it is projected that the global shipping industry could account for almost a fifth of carbon emissions by 2050,” Azcueta said.

A multitude of wing assembly shape configurations were analysed in varying wind conditions. In total, almost 1,000, high-fidelity CFD simulations were performed and analysed. The simulations were used to set up force models needed to describe the vessel’s hydrodynamic and aerodynamic behaviour.

A two-digit percentage improvement in the aerodynamic performance of the wing assembly was obtained, according to Cape Horn Engineering.

Cape Horn Engineering said that further CFD design optimisation in 2020 will take the Windship concept ship into consideration as a whole, including the ship hydrodynamics, engine and propulsion, aerodynamics and optimal routing.

“When it comes to building a new ship, the design must be optimised to fit the wings on deck efficiently from both an operational and performance perspective. The design of hull features such as skegs or bilge keels might be required to balance the transversal instability induced by the installation of the WPT,” said Azcueta.

“Having a CFD model comprising of both the hydrodynamic and aerodynamic artefacts of the design will allow highly targeted design optimisations,” he said.

Azcueta explained that wind propulsion systems and ship design are currently considered as two entities, hence they are designed independently.

“It is reasonable to believe that they should be designed as a whole from the earliest stage, due to the dependency of each aspect on the other. The optimisation process and predicted potential performance will determine the optimal operational points resulting in the lowest required engine power, fuel consumption and total emissions. The aim of our project is to facilitate the uptake of WPT,” he said.